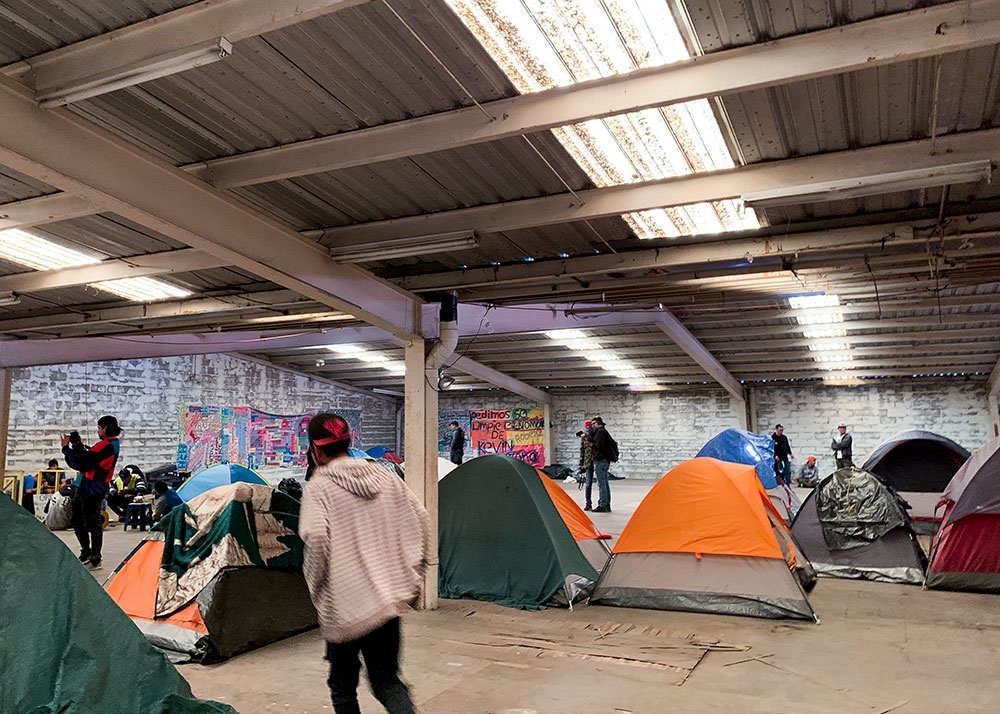 In January 2019, El Tecolote intern Sage Mace travelled to Tijuana, to offer aid to the Central American refugees there. While there she interviewed her former youth pastors, Phil and Mindy Steiner. This is the second installment of a commentary recounting her experiences. Updated on March 28, 2019.

I cannot remember a time when our politics was anything other than deeply entrenched dogmatism and polarization. This may only be  because I am 19 and the current president is the first president of my adulthood. I have come of age at a time when, in this country, to be compassionate is political and to choose love is political. My adulthood has been marked by increasing hate and hostility, fed by the media to fearful mouths, which is leading to our own pacification. The socialization of my adulthood, and perhaps of yours, has encouraged the acceptance of lives devoid of real truth—truth that is uncovered with our own hands and proclaimed with our own voices.

The refugee crisis at the border has spawned two competing narratives in the media about the caravan of Central American migrants who have traveled to Tijuana in search of asylum. The first: Migrants of the caravan are cold-blooded killers, drug dealers and invaders. The second: Migrants of the caravan are asylum seekers, desperate mothers traveling with child in tow. The two, although contradictory, bare a similarity. Both “truths” have been manipulated to advance a political agenda and in doing so have neglected the complexities of the issue, escaped accountability, dehumanized and hindered the formation of solutions rooted in an understanding of who the migrants are.

On a Sunday evening after church, I was offered the invitation to stay with my former youth pastors Phil and Mindy Steiner at their home in Ensenada, Mexico. I agreed to go, bringing with me my passport and a small bag. The trip began on the Mexican side of Friendship Park, a binational area that links the U.S. and Mexico, a place I had previously visited, and therefore could notice the changes that had occurred there. The same art spans the wall and touches the ocean—butterflies painted at the top, taunting and spiraling upwards and into the sky.

But, paying close attention, the dissonance was tangible—a helicopter overhead cut through the sound of friendly chatter; a tattered piece of clothing hung, caught to the top of the fence; a border patrol agent raced down the length of the wall and new razor wire stands as insurance that no one would pass. It was here that we met four men, migrants from Central America. Over tamales, I learned that one of them is my age as and has four sisters back at home, who he hopes to return to.

In the car ride to the local church—which also moonlights as a shelter for Central American migrants—Mindy told us that they have met many who share similar stories of hardship, others have endured nightmares. A Guatemalan child who stayed at the church drew pictures of mothers whose stomachs had been cut open—their babies ripped out by guerillas. It was a scene the boy had witnessed: a scene that drove his family to travel for 32 days in search of asylum; 32 days in which the caravan arose at 3 a.m. to cover 70 kilometers a day; 32 days in which their feet grew so sore that they resorted to sticking sanitary pads to the soles of their worn shoes.

I was welcomed to the church by the Pastor and a migrant from El Salvador named Noe. The Pastor is a presence of peace, his attire plain and his words wise. Noe is vibrant and animated, he speaks fast and is even faster to volunteer to help out when needed.

The second day we spent at the beach with Noe, I began to string together his story. He teased Phil’s broken Spanish and with bright eyes spoke of God, his country’s beauty and his five month old daughter. His longing to return to her, and his country, was as tangible as the sand between my toes. The stories exchanged echoed the sentiments shared by Phil.

“Nobody leaves home, unless home is the mouth of a shark,” Phil said. We sat across from each other at his family’s dinner table, his two small dogs vying for my attention. The setting was one that could be found in the Bay Area, a seemingly ordinary family who move quick on their feet, juggling running a business with parenting. The Steiner’s devotion to their faith brought them from Novato, CA to Mexico in May of 2017.

“How I understand faith now is that Jesus was a minority in his time,” Phil said. “He suffered oppression, suffered discrimination, was a refugee. When I look at that, I see that’s what God cares about, therefore so should I … I believe we get as close to the heartbeat of God in those places.”

The Steiner’s commitment to this ideal humanizes a highly politicized issue, which has divided Americans even further in their impermeable beliefs. A small step, embodied by the Steiner’s in an effort to bridge polarized minds, is taken via this kind of relational work. Relational work requires one to step outside of themself.

“When we have those relationships is when we stop objectifying people and characterizing them as such because now they’re real people,” Phil said. Through this faucet, Phil has come to see that “[in the caravan] each person has a story… it’s easy to put them all together as just some political people, or invaders. Well, no they’re not. They’re individual people, with stories, with real lives, fleeing real issues.”

Phil, the co-founder of nonprofit Be2Live, spoke on the trajectory which led him to pursue social justice: “In the scheme of life I was set up pretty well, white middle-class family … and my church was very mission minded which played a lot into who I am.”

Knowing that the origin of mission work is inextricably bound up with the history of colonialism, I asked Phil of how his family navigates this tension while operating their nonprofit Be2Live, which brings high-schoolers to Mexico on service trips.

“Missional-colonialism wasn’t something I was aware about until the last six years or so,” Phil said. “I’m very sensitive to that now … I don’t want to come across as, ‘I have all the answers,’ because I don’t. Or that I have the right perspective on life, or how I see my faith is the only way and best way. I see my role as with the people and journey in life with them together.”

The work of Be2Live bares witness to a statement that could be diminished to a mere sentiment. In partnering with orphanages and organizations that are run by and for the people of cities like Tijuana and Mision, Be2Live is held accountable to their hope that they might “bring resources,” and “not to co-opt anything that’s already there but perhaps fill in gaps where needed,” creating a reciprocal relationship founded on trust, humility and love.

On my third day in Tijuana, I was invited to pass out lunches at the Contra Viento y Marea shelter located in city’s Zona Norte. Seven of us piled into the Steiner’s minivan and the church van trailed behind us. Spirits were high as I sat beside Noe who sang and occasionally leaned over to show me pictures of his daughter. As the car came to a halt brought on by traffic, a shift occurred—a phone call from the pastor of a local church, that moonlights as a shelter for Central American migrants, brought news that the shelter was to be cleared out of all migrants by noon due to concerns of the Mexican federal health agency (aka COFEPRIS).

Upon arrival, 10 police officers in riot gear flanked one end of the street and a lone wolf clothed in head to toe black, mouth covered with a bandanna, biked by. In a circle we prayed, eyes shut tight, and in surveillance the federales and police marched the length of the street. Minutes were met with new reminders that the situation could become violent: military trucks pulled in, men with guns perched atop them, helicopters circled above and reporters entered and exited unintentionally flaunting the freedom so hungered for by those inside the shelter. With permission from the police, we were granted 15 minutes to serve lunch to the migrants inside.

Spanning the length of the shelter sat rows of tents, each one further submerged in darkness as the natural light only reached those closest to the street-facing windows. A crowd consisting of reporters and California militant left-extremist group By Any Means Necessary (BAMN) overwhelmed the small space. The pastor then began the process of negotiations with the police. Eventually the negotiations did turn in our (and the migrants’) favor.

Letter: A word on Sexual Assault

Amid the chaos, one migrant told a Telemundo 20 reporter: “They [government authorities] come and try to push us out … The people [are] scared.” Another migrant said, “It’s an excuse, [the shelter is] not too bad.” The migrants distrust—as a means of self preservation—is not without cause.

The individuals of BAMN stood on the outskirts engaging with neither migrants or Americans. Strapped to their belts were bottles of fluid used to combat tear gas, evoking an image reminiscent of their involvement in the well documented Jan 1st tear gassing of migrants by U.S. Border Patrol agents.

A discussion with Mindy revealed the complexities of the tear gassing incident, which have gone unbeknownst to the larger public as there is no clear truth which aligns perfectly with either left or right media.

“It was supposed to be a peaceful march on Christmas Eve, but it got pushed back until New Years Day morning. [The march] was not to cause mayhem but to say to border patrol, ‘We’re here,’” Mindy said.

Handouts distributed at the Contra Viento y Marea shelter the day of the eviction—and distributed well before throughout migrant camps—urged the march to the border with BAMN members present. The national chair of BAMN, Shanta Driver, in phone interview with KPBS said: “Getting across the border by any means necessary is absolutely the right thing to do … we urge and encourage people to take mass action.” Driver’s statement revealed how far removed she is from the tightrope on which the migrants walk: Their own lives are at risk as well as their reputation, which precariously rests in the hands of American media.

Mindy testified to the damage done by misconstrued efforts of American activists. She recounted overhearing a police officer speak to a local woman in San Diego about the march: “He [the police officers] was saying they’re [the migrants] using terrorist acts by pushing forward women and children, so now what sticks in her mind is the word ‘terrorist’ … Americans are crossing borders to incite innocent, Hondurans, Mexicans, Guatemalans, El Salvadorans—who have no idea who to trust—all to create a big political boom.”

The ‘political boom’ started is one lacking in substance, one exploitative in nature and one withholding of truth—truth that is not necessarily singular or absolute, but truth devoid of politics that uses mothers, fathers, and children as pawns.

The migrant issue requires justice: A process requiring the abandonment of polarization and pragmatism in exchange for humility, which asks questions and listens to the perspectives of those most involved.

Mindy said, “It’s easy to see a big New York Times headline and stop, and become fearful. But you have to ask, ‘Why did this happen?’ If we asked ‘Why?’ and ‘How?’ all the time, rather than taking everything at face value, we would learn a lot more.”