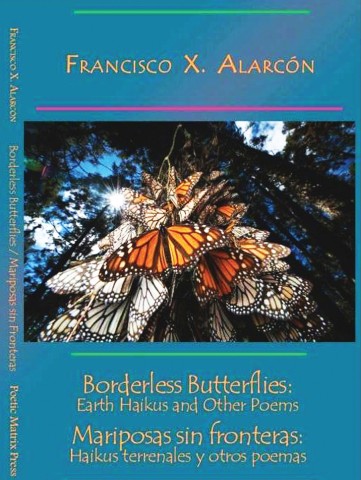 The 159-page book leaves the reader with a sense of both healing and the necessary work needed to preserve Mother Earth, the butterflies and humankind. It’s a book that can be read and browsed many times throughout the years, for insight, refreshment and renewal.

The book is broken up into four sections: earth, fire, water and air. The multilingual poems read as simple as those elements, and like those elements, the poems are profoundly powerful and essential. Juan Felipe Herrera, California’s poet laureate, refers to this simplicity as “ground-breaking text” and as a “rising inspirational fountain.”

Alarcon’s inclusive poem “América” is offered in four languages: English, Spanish, Irish (Gaelic) and Dutch. Its words reflect the multiplicity of peoples and cultures that make up America:

booming loud and bright:
“I am your country too”
this Fourth of July”

The English version of the poem offers a Spanish accent over the “e” in America, so the poet is always aware that even in reference to the U.S. Independence Day holiday, America is one continent.

That consciousness permeates Alarcón’s work. His focus is on the metaphor of a butterfly crossing the U.S.-Mexico border without documents, transforming itself in four stages and in four generations:

its long migration
and start over again
the marvelous life cycle
of the monarch butterflies-
the ultimate borderless
migrant creatures!

One of Alarcon’s Earth Haikus is based on an image from the Aztec Codex Borbonicus. The Mesoamerican glyph shows a blossoming flower, representing poetry. From the glyph of speech comes this amazing verse:

monarch butterflies –
together we can move
mountains

This poem, like so many of the haikus in this book, not only conforms itself to the 17 syllables in three lines, but it does so in two languages.

The same is true for the poems “Healers” and “Curanderos.”

“His mastery of the Haiku and Tanka forms is so completely part of the reading of this beautiful book that one can’t but feel that it is a deep tribute to the Japanese people as the victims of the Fukushima disaster, in a great solidarity from the Latino world,” said Jack Hirschman, San Francisco’s former poet laureate, noting that haiku’s and tanka’s are both Japanese short poem forms.

Hirschman’s remarks elevate Alarcón to the level of a spiritual literary ambassador or statesman, as he has become a spokesperson for the poetic spirit seeking unity and peace in the world. Alarcón often coordinates poetry workshops, readings and festivals. He’s also made it a frequent habit to open community events by leading prayers to the four directions. This included El Tecolote’s celebration of its literary supplement, the Revista Literaria, in August of 2010, which Alarcón edited.

We are like the clouds: When the voices of immigrant children turn into song