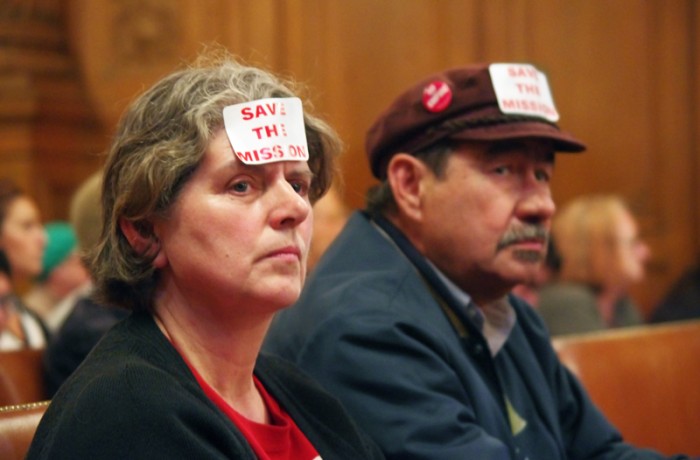 Elizabeth Deyoung (left) was one of the hundreds who voiced their support for the moratorium during the lengthy board of supervisors meeting on June 2. Photo S. Thollot 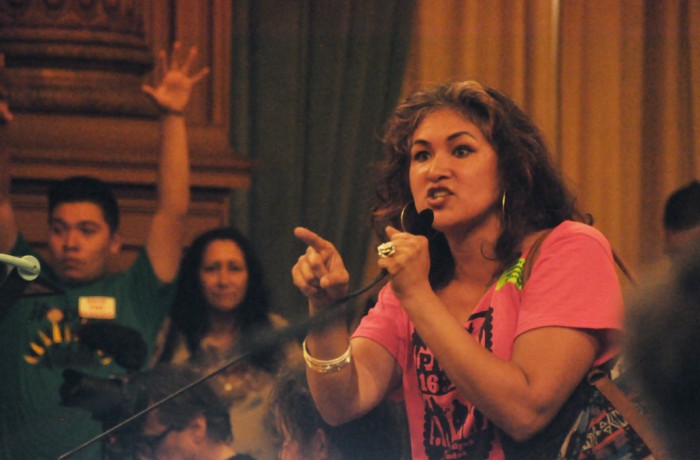 Mission District resident Sandra Sandoval implores the board of supervisors to pass the moratorium on luxury housing in the Mission June 2. The meeting lasted nearly 10 hours as hundreds of residents voiced their support of the moratorium, which failed to gain the nine votes to pass. Photo Bridgid Skiba 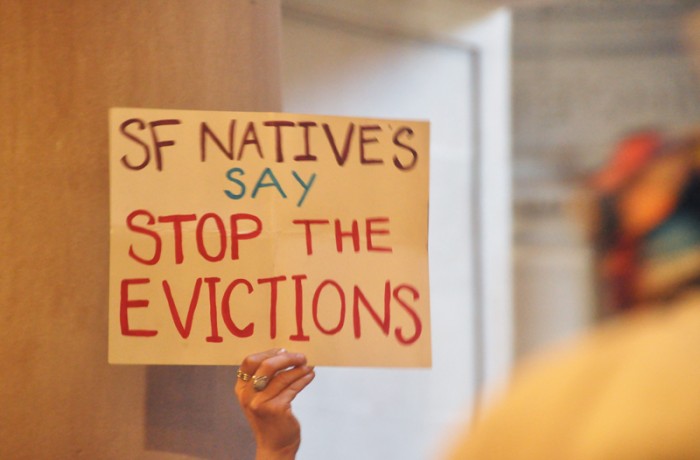 A San Francisco native displays a sign at City Hall for an end to eviction on June 2. Bridgid Skiba 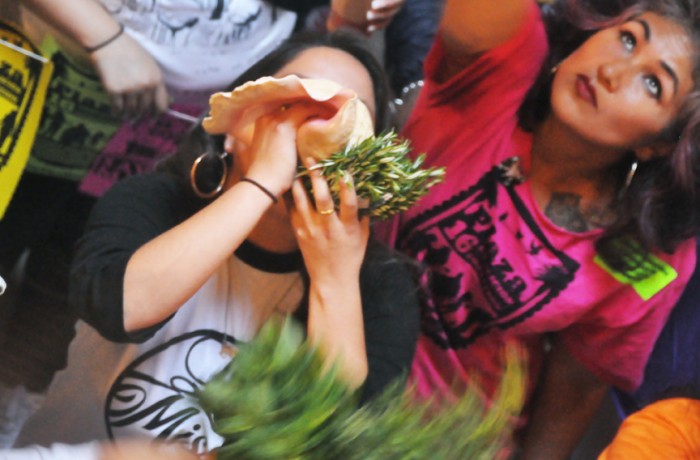 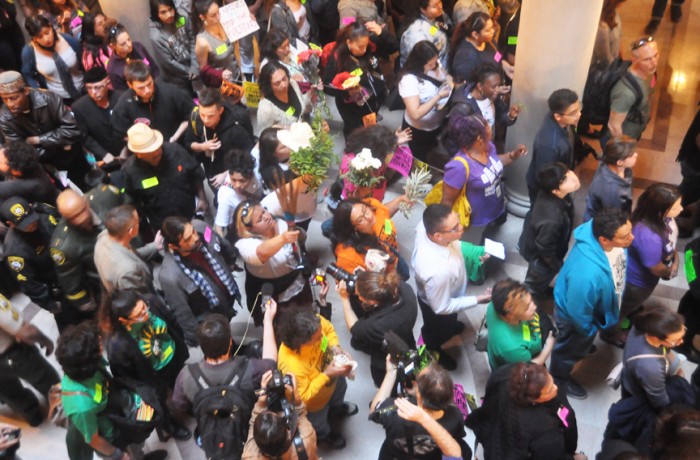 Community members flood City Hall on June 2 to support the proposed moratorium on luxury housing, which was ultimately voted down by the San Francisco Board of Directors. Photo Bridgid Skiba 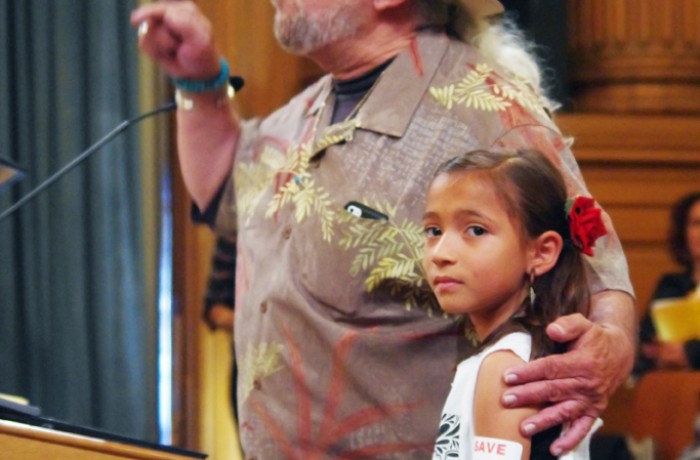 Mauricio Aviles and his granddaughter were two of the hundreds of Mission residents who spoke in support of the Mission moratorium during the nearly 10-hour board of supervisors meeting on June 2. Photo S. Thollot 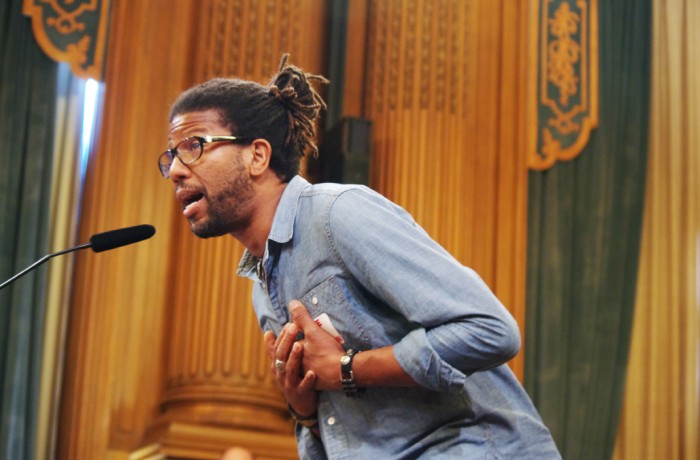 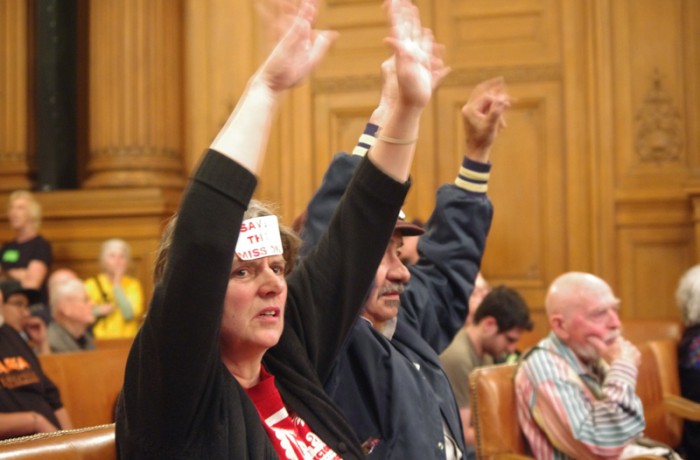 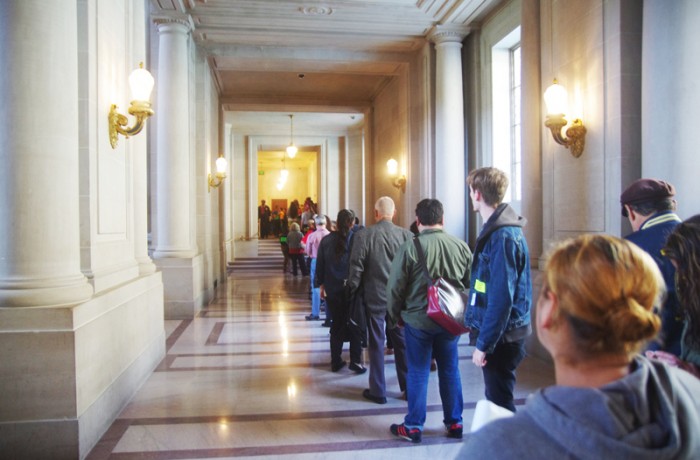 For nearly 10 hours, hundreds of Mission residents spoke in support of the moratorium at the board of supervisors meeting on June 2. Photo S. Thallot

The clock was just 13 minutes shy of midnight on June 2 when the San Francisco Board of Supervisors—after listening to nearly nine hours of emotional public testimony from many distressed Mission residents—voted down the luxury-housing moratorium proposed by District 9 Supervisor David Campos.

The moratorium, which would’ve called for a 45-day halt on the construction of luxury housing in the Mission District, required nine of the 11 supervisor votes, but received only seven.

Introduced at the beginning of May, the moratorium was controversial, gaining support from some organizations, like Calle 24 and Mission Economic Development Agency (MEDA), but strong opposition from others, like Grow SF and San Francisco Bay Area Renters Federation (SFBARF).

Those against it argued the measure wouldn’t stop evictions, and would actually cause rent prices to increase at a quicker pace.

District 8 Supervisor Scott Wiener had been the most outspoken board member against the moratorium, maintaining that the legislation, had it been approved, would likely become permanent and might expand to other neighborhoods.

The chances of Campos’ legislation being approved seemed slim heading into the June 2 meeting. A week earlier, the proposal failed to gain the support of the San Francisco Democratic Party (DCCC), voting 13-10 against it.

Why the moratorium?
“Recently there were 18 sites that qualified for affordable housing,” Campos said. “Today, there are actually only 13.”

Those other five sites were taken by luxury housing developers.

“By the time the city gets around to buying these properties, they will be gone,” Campos added.

“You have to understand how personal this is for so many of us,” Campos said at the June 2 hearing, which was attended by hundreds of community members, who flooded city hall. “In my whole tenure as an elected official—my almost 7 years on the board of supervisors—I have never seen something like what happened here today. I have never seen a community so moved by what’s happening on the ground, that eight hours into a hearing, close to midnight, there are still people lined up to speak. That doesn’t happen just because.”

Before the public comment segment began on June 2, Farrell said he was opposing the moratorium.

“Our housing crisis started quite a while ago,” Farrell said. “To say that in 45 days we’re going to come up with a solution is completely disingenuous. If it was so important today, which it is, we should have started this conversation years ago.”

The meeting was also paused several times by board president Breed due to cheers and jeers of the emotionally-charged crowd.

“Do your job; you’re here because you were elected by us,” said Mission resident Sandra Sandoval, who kneeled in front of the board, imploring them to pass the moratorium.

“You’re … going to go down in history as the board who sold out San Francisco, [but] it’s never too late; you have a chance to change that today.”

Despite the failure of the moratorium, it’s likely voters will have a say on the issue come November.

“I also know that this is not the end, that this is the continuation of a movement,” Campos said. “Because we have started something special in the Mission.”

Alexis Terrazas contributed to this story.

Board stalls on amending legislation to regulate Airbnb