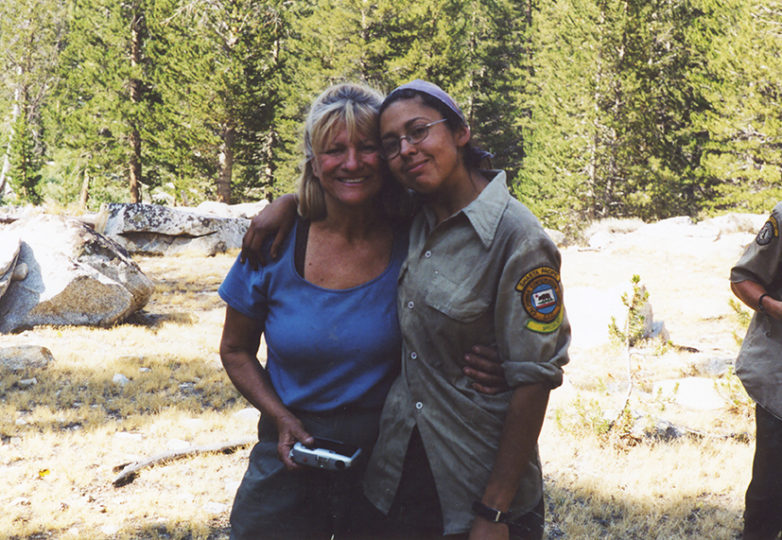 The author (at right) with Jeannie, a backcountry cook, during a backcountry trail work project in Kings Canyon National Park, 2002. Courtesy: Mabel Jiménez 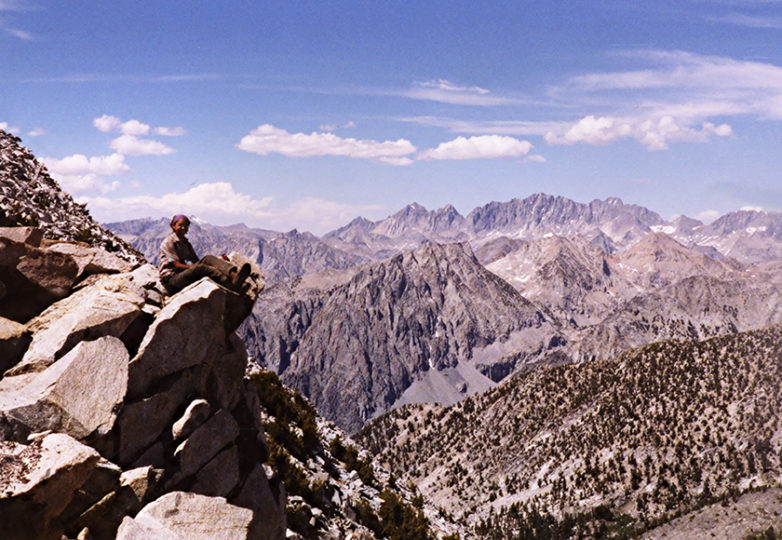 The author during her time with the California Conservation Corps, 2002. Courtesy: Mabel Jiménez 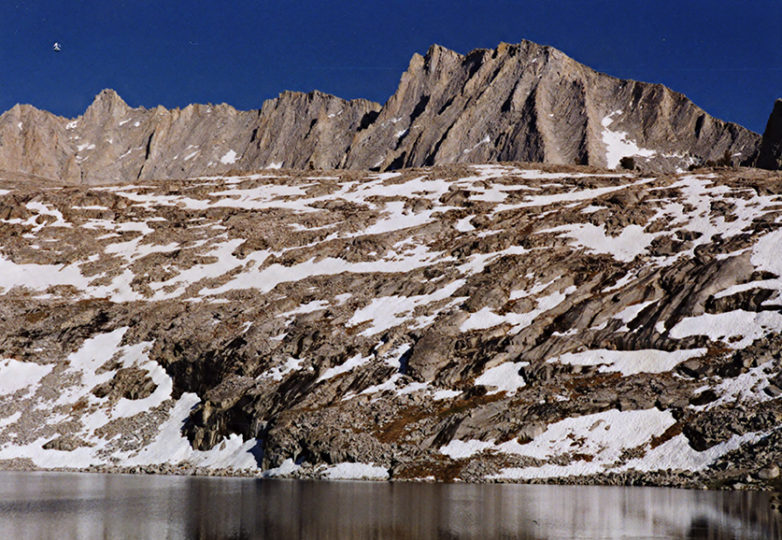 Although I was born a U.S. citizen in Chula Vista, CA, I’ve always felt more like an immigrant. I had lived all my life until that point in Mexico, gone to school and made friends there. But when I was 18 years old, I decided I wanted to see what was outside of Tijuana.

I went to work that Wednesday, Feb. 28, 2001, with my luggage already packed, and afterward to the Greyhound Bus Station in San Diego, where I bought a ticket for the 9 p.m. bus that would take me 750 miles north to Fortuna (Humbolt County), CA.

I got on that bus with everything I had to my name: two suitcases and $60 in my pocket. I fell asleep in my seat and woke up the next morning. There was a four-hour layover in San Francisco, so I decided spend the afternoon exploring the city.

The Transbay Terminal back then was located in SoMa on Mission Street, and when I emerged from the station and into the streets, I was immediately taken by a feeling I had never experienced. It was as if the city was a living organism, breathing and with a beating heart. But my plans had been made and I continued the trip further north, promising myself that I would come back to this city one day. At around 4 p.m. I got on the next bus to finish the trip.

I had come to work for the California Conservation Corps (CCC), which offered lodging and three daily meals. It paid minimum wage, which was $5.75 back then. The work was outdoor physical labor, anything from picking up needles and trash from the side of the road, to tree planting, invasive species removal and trail building.

I arrived in Fortuna, 25 hours after leaving San Diego. It was raining. I saw that there was no bus station, not even a bench or shelter, just a sign behind the parking lot of a liquor store.  I looked around for the CCC van that was supposed to pick me up, but there was no one there.

Having been dropped off with my luggage on a dark, unfamiliar street, completely alone, I was scared. I had some quarters on me and I hauled my bags through the rain in search of a payphone and called the CCC center.

About seven minutes later a white van showed up and soon I arrived to my new home at the CCC Shasta-Pacific center.

The following day was spent meeting the crew, hauling wood and cleaning up campsites. I remember seeing people rolling their own cigarettes for the first time in my life and it seemed so exotic.

Arriving to a new country in a beautiful forest setting at 18, it was like being reborn. Everything and everyone was new—the surroundings, the work, the smells and most of all, the freedom.

Six months later 9/11 happened. All work projects were cancelled that day; crews instead spent the day sharpening tools, washing the vans and doing other busy work while our superiors figured out what to do.

We resumed work the following day. We typically began days with safety meetings where we sat in a circle and each person shared a safety tip, but on  Sept. 12, 2001 our supervisor didn’t want safety tips. Instead, he went around asking each of us the same question: “Are you proud to be an American?”

I had mixed feelings. Yes, I was an American citizen by birth, but I had grown up in Mexico and had only been in the United States a few months. I felt like a Mexican who was just trying out the whole American thing.

“I’m proud of who I am, and I’m grateful to be in the United States,” I said when my turn came.

But it wasn’t enough.

I just wanted my turn to be over.

After that, life slowly went back to normal, but I noticed many more American flags everywhere I went from that point on.

One of the things I had packed for my trip to the United States was a 35mm film Vivitar SLR camera. Back then, film canisters were sold in little cardboard boxes with exposure setting instructions printed on the inside of the package. My first lessons in photography came from inside of those little boxes.

I fell in love with taking photos, capturing all the new landscapes with that first camera, which had a broken light meter and a manual-only focus.

After two years in the conservation corps, I started taking classes at College of the Redwoods.

In 2008, seven years after I wandered through the streets of San Francisco on that long Greyhound bus ride, I fulfilled that promise to myself and returned to the city to study photojournalism at SF State. For the second time, I was restarting my life, alone in a new place.

I graduated in 2010 and soon was welcomed to the world of El Tecolote, where I was hired as a photography editor, and where I still work today.

Now, sixteen years later, I can confidently answer that question to my former Conservation Corps supervisor: “I am proud to be a Mexican-American.”

I am grateful for the opportunities I would not have been given elsewhere, and proud of what I’ve done with them.

I am grateful to live here safely while holding a job that in Mexico could be a death sentence. I am honored to lead a team of visual journalists who are documenting the history of the Latino experience in a mindful and conscious way that is not currently being done by any other media outlet in the city.

As I reflect now on my Americanness, I am surprised to find that even after sixteen years I sometimes wonder if I’m welcome here. Thank God for the Mission District.

Sixteen years after that long bus ride, I’m back to where I started: I live just a few blocks away from that now demolished bus terminal where I first promised myself I would return to San Francisco.

For every person who has left their country behind, there comes a time when the memories we make in the new country become more vivid and real than those we made in the motherland.

Eventually you will feel American, with the rights and privileges it brings, though more for some than for others.