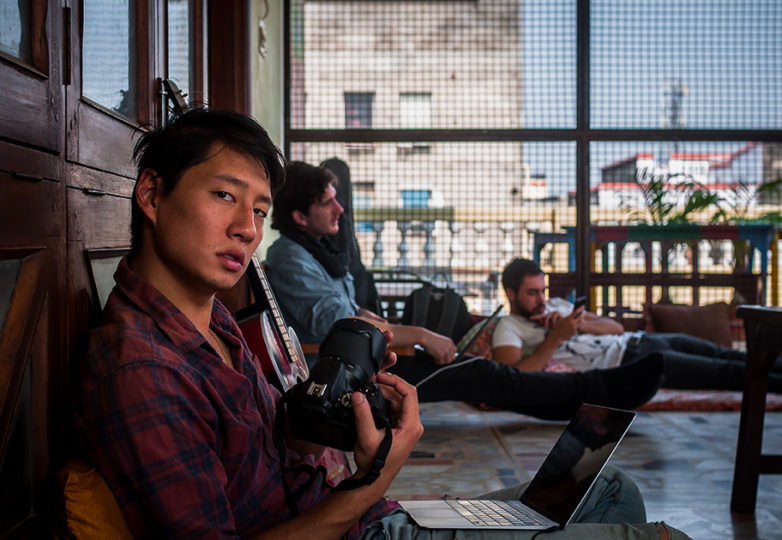 Mike Chen sets up his laptop and camera at a refugee camp in Varanasi, India, after completing a two-month 4000 km solo motorcycle trip across the Pakistani and Tibetan borders of northern India, through the Himalayas of Nepal. Courtesy: Mike Chen 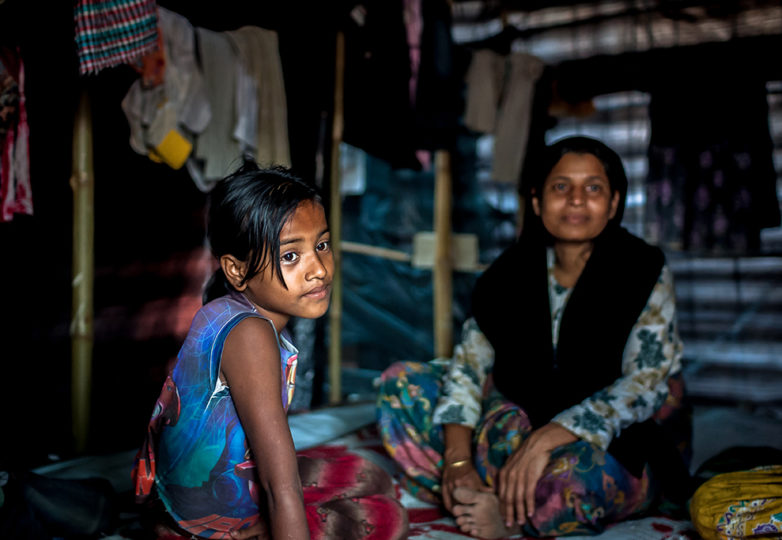 A young Rohingya girl sits inside a shelter with her mother in the Kutupalong refugee camp in Bangladesh on Dec. 18, 2017. Photo: Mike Chen 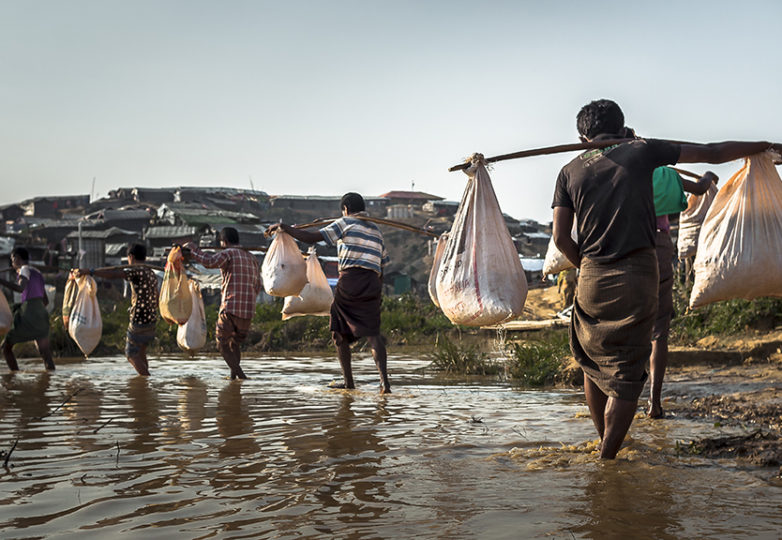 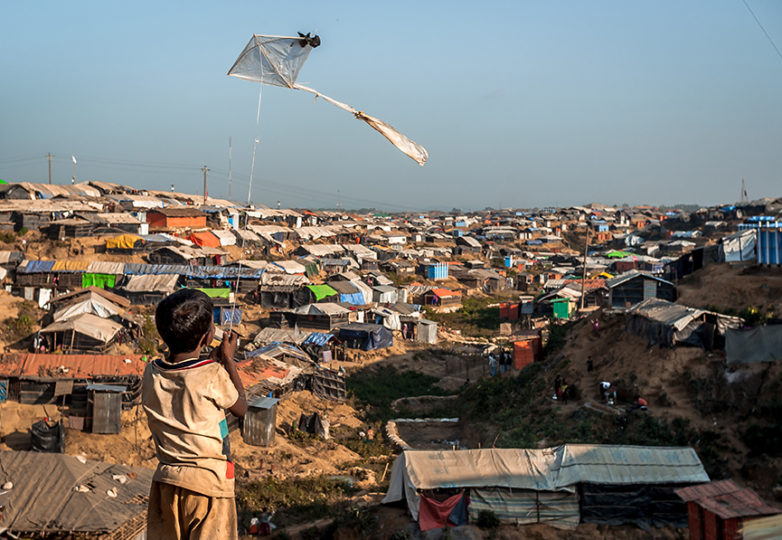 “I’m gonna be a pilot when I grow up,” says a young boy on Dec. 25, 2017, as he flies a plastic bag kite over Kutupalong refugee camp in Bangladesh. Kutupalong is home to nearly one million Rohingya refugees. Photo: Mike Chen 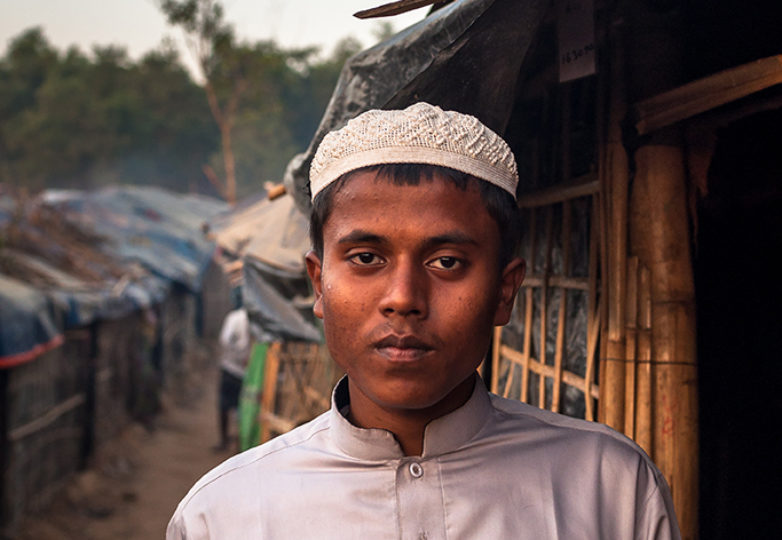 Unfulfilled by his nine-to-five job in the tech industry, Mike Chen wanted more out of his city life.

So in 2016, the San Jose native decided to quit his job at Apple and travel. It was on the road where he discovered his latent passion for photography, which eventually led to his documenting the Rohingya refugee crisis in Myanmar.

Frequently referred to as “ethnic cleansing,” the crisis began in 2012 in the state of Rakhine with deadly clashes between Myanmar’s Buddhist majority and its Rohingya Muslim minority. Nearly 140,000 Rohingya Muslims were displaced, fleeing genocide at the hands of Myanmar military and Buddhist extremists. In 2017, the crisis had escalated.

“The disproportionate response by Myanmar security forces following attacks on police and military outposts by the Arakan Rohingya Salvation Army (ARSA) on 25 August 2017, resulted in grave human rights violations, including widespread killings, arbitrary arrests, mass arson, and sexual violence, all of which have been extensively documented by international human rights organizations,” read a January 2018 report by ASEAN Parliamentarians for Human Rights (APHR).

According to a report from the Council on Foreign Relations an estimated 706,000 Rohingya have fled Myanmar in to Bangladesh since 2017.

Chen first became aware of the Rohingya plight while motorbiking through Nepal and India. He immediately sold his bike, travelled to Bangladesh and began documenting the crisis, offering his help to NGOs as a volunteer. The experience and the connections he made with the refugees changed Chen’s perspective of the life he was living in San Francisco.

“I realized from this trip that it’s not about you, it is about helping other people that makes you satisfied and happy for yourself,” said Chen. “I started traveling for other people not just for myself.”

A new approach to life

Chen volunteered in late 2017 as an English teacher at an orphanage in Beijing, China. It was there where he began exploring his passion for photography.

With a basic knowledge of the camera settings, Chen called his parents and asked if they could send the camera laying around at home so he could take portraits of the orphans. Chen never took photography classes, but along the way he crossed paths with other photographers who shared their knowledge with him.

Chen’s camera didn’t have a zoom lens, which forced him to be closer to his subjects.

“I really wanted something where I can zoom, because I can take pictures of people farther away,” said Chen. “But then after I realized it was better this way because it forced me to approach strangers … I didn’t speak their language but it made me get out of my comfort zone.”

After his time spent at the orphanage, Chen decided to take a 40-hour bus ride from Beijing to Ulaanbaatar, the capital of Mongolia.

Chen lived in western Mongolia with nomads who hunt with eagles, and was fascinated by their lifestyle. He said living with the nomads—who only traveled with their sheep herds and very few items—and their families made him realize that life can be much simpler.

“I wanted to experience other ways of being happy … here in our society, we define ourselves with things and how much money we have … I didn’t want to believe this was the only way to be living and be happy,” said Chen.

But upon learning of the Rohingya escaping and being smuggled out of Myanmar by boat, Chen decided to use his camera to help.

Chen said he immediately offered help when arriving to the camps because he didn’t just want to be documenting. One NGO asked Chen to take pictures of the medical field clinic. He said his days consisted of doing field visits and taking pictures.

“I wanted to take photographs to actually show people in Silicon Valley … to show what is going on outside of our bubble,” said Chen.

Chen describes the boys as happy and eager to practice their English with him. Chen said he realized that these people were more than just refugees. They were friends who were stuck in unfortunate situations.

“I’m thinking, am I just going to get along with my life? And get another tech job and buy things to make myself happy, or am I trying to do something, and take these stories and raise awareness,” said Chen.

During his time in Bangladesh, Chen also collaborated with a couple of journalists and made stories on hiking deep through the jungle to investigate what hundreds of children would do just to get firewood.

Chen recalls taking his most memorable picture during that moment. He captured two brothers, one of them had an injured leg and was being carried through a stream by the other. The authenticity of the moment and the brothers’ reaction when Chen took the picture are what he likes the most.

Chen describes his photography to highlight his subjects with a higher perspective, he does not want to make his audience to feel guilty when looking at the pictures. He wants to purposely make his subjects look strong and relatable.

“I want to share my work and help lend a bit of perspective to people at home and at the same time give back to those who gave me so much while I was on the road,” said Chen. “I believe connection and empathy is the solution to the problem—putting people in a positive empowering light.”

Chen recently held an expo were he sold more than 50 prints, with all the proceeds going towards the orphanage in Beijing and the refugee camps he has visited. He has raised around $5,000 through Gofundme, print sales, and donations. He will be donating the money evenly between the refugee camps and the orphanage.

Now back in San Francisco, he aims to raise awareness on the Rohingya refugee crisis, and is finding it hard to return to his previous profession. He’s currently debating whether to return to continue as an engineer or pursue photojournalism. He said that while he tries to discover what path he wants to pursue, he still works on projects that touch on themes like homelessness in San Francisco.

“Hopefully I can create a similar connection between us and the thousands of “refugees” we see everyday outside our doors,” said Chen.