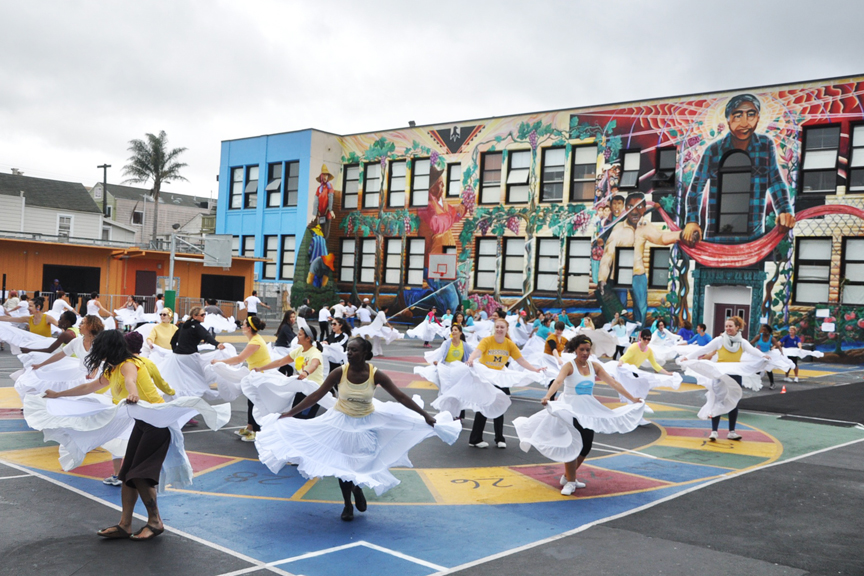 “Without water, we can’t live and exist,” said Roberto Hernandez, executive producer of Carnaval. “Through music and dance and Carnaval, we, in an artistic and fun way, are going to be addressing the drought and the crisis.”

With a deeply rooted history in the Mission, Carnaval has grown from a small neighborhood event to a San Francisco event, to a Northern California event, according to photographer Lou Dematteis, who photographed the first four Carnavals.

It was on a Sunday in late February of 1979 when a few thousand people packed the small park nestled just a block south of Cesar Chavez Street—back when it was still called Army Street—to celebrate the city’s first ever Carnaval.

Dematteis recalled how there weren’t any barricades that prevented people from joining the parade.

“Actually, it was much more participatory because there were the various groups, but then there were … the spectators who got into the [scene],” said Dematteis. “We went around the park a couple of times and then [the spectators] got in the back of the parade and it was pretty cool. It was more like a neighborhood event.”

The second year, Carnaval took place at Dolores Park with a much larger crowd.

“We had no idea how many people were going to be there and we ended up with about 30,000 people, which was kind of a big surprise,” said Dematteis.

Dematteis said that Carnaval grew in size the second year because of word of mouth from the various dance, drummer, musician and low-rider communities in the Mission District.

The third year Carnaval took place at Civic Center, which Dematteis said, transformed it from a neighborhood event into a city-wide event.

After the third year, the city said that Carnaval needed to find a more permanent location for its annual event, according to Hernandez. A home was found on Harrison Street. With Carnaval’s relocation, Harrison Street changed as railroad tracks were removed, the street was repaved, trees were planted and the Carnaval mural was added on the PG&E building between 18th and 19th streets.

“We started with just a few blocks on Harrison Street and then it just kept growing,” said Hernandez. “More and more people came and now over 400,000 people come [each] day over Memorial Day weekend.

Dematteis believes the secret to Carnaval’s staying power is its diversity.

“It’s a fantastic event because it brings together all races, all ethnic groups, all nationalities. They all come together and it’s a great expression of art and what we want our communities to be—everyone working together.”

Given the changing landscape of the Mission, Hernandez notes that there are some tensions, but says that Carnaval is the time to celebrate the spirit and culture of the community.

“Carnaval is the time when we put the flag up. We carry the flag and say, ‘This is our barrio, this is our cultura. Aqui estamos, no nos vamos,” said Hernandez. “We’ve had some…techies who don’t like Carnaval…and threaten to shut it down and I’ve said ‘Bring it on.’”

The 2015 Carnaval San Francisco Festival will be held Saturday and Sunday, May 23 and 24 from 10 a.m. – 6 p.m. on Harrison Street between 16th and 24th streets. The Grand Parade on Sunday, May 24th begins at 10 a.m, at the corner of 24th Street and Bryant Street where it will proceed west to Mission Street. From there, it will go north on Mission Street until 17th Street, where it will turn east onto South Van Ness Avenue.

Story by: By Elizabeth Silva