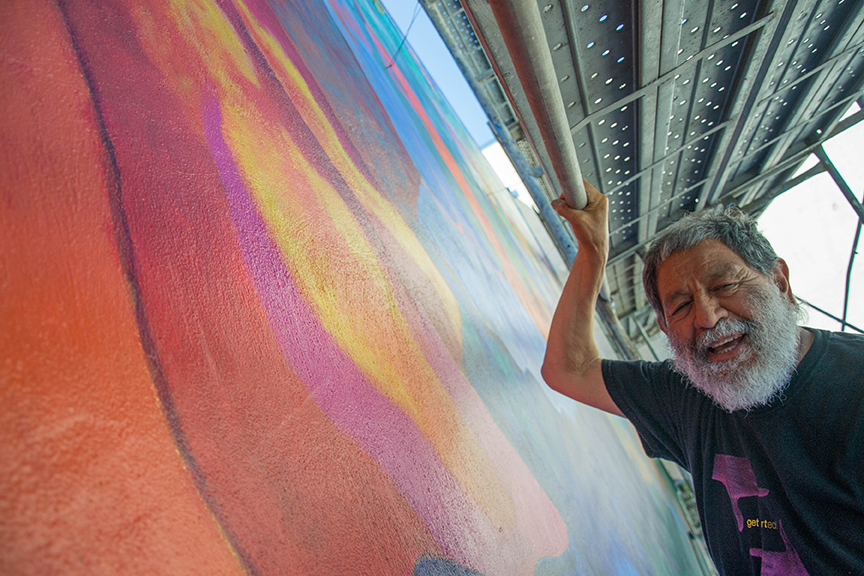 If you’ve walked by the Mission Cultural Center for Latino Arts (MCCLA) over the last few months, you may have noticed the scaffolds and the artists working to restore the “Spirit of the Arts” mural, which has adorned the face of the building since 1982.

The artists vary in age, but one of them, Carlos Loarca, is 80 years old. He is one of the original artists to work on the mural, along with Betsie Miller-Kusz and Manuel Villamor. The three decided the mural was due for a much needed restoration as a way to commemorate the MLCCA’s 40th anniversary, and they brought in a younger generation of artists to help.

The mural depicts a single ancestral indian figure meant to represent the ancient civilizations of the Aztecs, Mayans, and Inca. “These were powerful people,” Loarca said. “They learned everything on their own, they built things. There were no books to tell them how to do something.”

I asked why there was only a single figure and he told me that “one person can represent many populations. One person can hold great influence.” The positioning of the figure is important as well. Its head is facing forward with arms back. It is not a protective position; it is bold yet vulnerable— “an offering of one’s self to the universe,” Loarca explained.

Loarca himself is no stranger to being bold and vulnerable. He grew up in Quetzaltenango, a city in the Western Highlands of Guatemala. “I love my country but I knew I wanted to see more of the world. I remember being a little boy looking over the highlands and knowing Mexico was over there, and beyond that the United States.” He didn’t draw or paint as a child, he had dreams of seeing and doing more but didn’t know exactly what that would look like. “It didn’t matter to me though. I knew my spirit would lead me to where I needed to be.”

In 1956, he was sponsored to come to the United States. First to San Francisco, then a yearlong scholarship at a university in Utah that offered English classes for foreign students. “I didn’t want to refuge myself into a community I was used to. I wanted to be in a place that held different principles, different ideas so I could expand my views.” He learned English and took jobs washing dishes and cleaning to get by. “I’ve always known how to work hard, so having jobs was never an issue.”

When I asked Loarca how he began drawing, he described a moment while in Utah where he was feeling particularly alone and homesick. “I was sitting at my kitchen table and just started drawing memories of my country on a piece of paper. Then I began painting and adding the colors of Guatemala. Because in Guatemala, there are colors everywhere.”

I think about the last time I was in Antigua, Guatemala and the colors I saw. From jewelry to clothing to the buildings, there were oranges, pinks, turquoises everywhere. And the faded yellow church, Iglesia De La Merced, that towers over the town. “We aren’t scared of colors in Guatemala,” Loarca said. “We are always around nature so we see color everywhere in the flowers, in the trees, in our clothing. We express ourselves through color.

And the Mission District is where Loarca wants to keep color, art and community alive. “Painting is the opportunity I have given myself to create images through the efforts of my memories and imaginary subjects and share that with the community.” The mural restoration project is a way to for him to do this with his fellow artists. In a continually changing and developing Mission District, the mural represents cultural endurance, and serves as inspiration for us to continue to offer ourselves to the universe headfirst and unafraid. “We as people do have a lot of power. We can cut into space and cut into time. There is a magic to it and magic is a part of the world. And a part of our lives.”