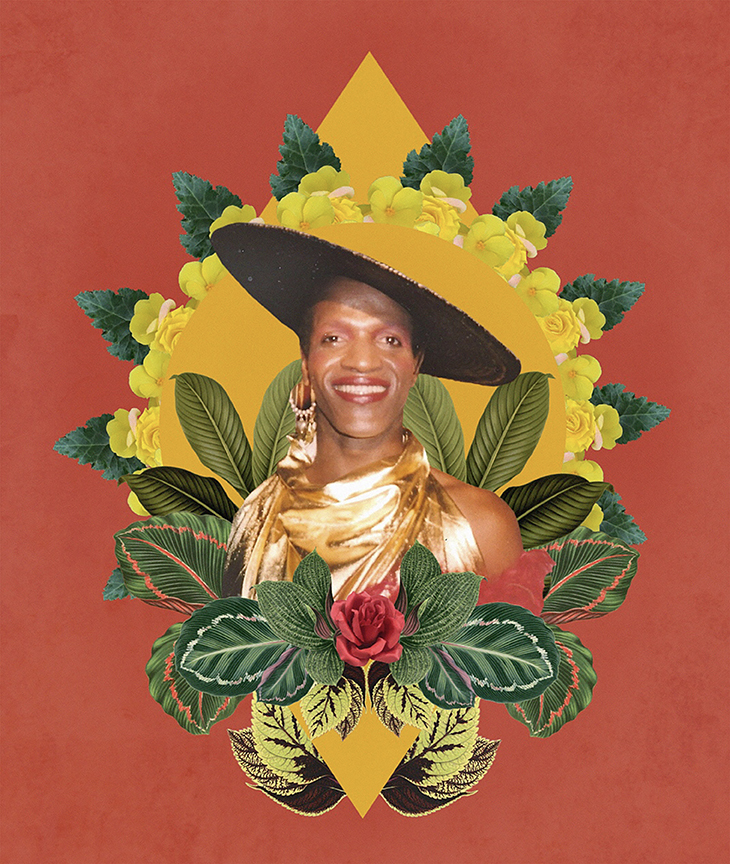 Raised catholic in Montebello—the predominantly Latino city nestled near East Los Angeles—artist Ruben Guadalupe Marquez never lacked for Latino traditions or culture, but his experiences weren’t always positive. As a gay man, Marquez witnessed the negative effects of a culture that has been heavily shaped by catholicism, one such effect being transphobia.

“I know that the Latinos aren’t really accepting to the LGBT community, and that’s why I want to use my platform to give them education so they can understand that we can’t help being like this, this is who we are,” Marquez said.

Now based in San Francisco, Marquez features in his work many queer pop icons surrounded by religious imagery, themes and patterns. He fuses religious and Latino tropes, because growing up, he never saw these these two communities, Latino and LGBTQ, combined in positive way.

His aim is to present these individuals from the LGBTQ community—who have been routinely shunned in mainstream media—as royalty, and he hopes to give people who see his work a new perspective.

“I think that visibility is the only way things are gonna get better,” said Marquez.” I have a weird relationship with religion. Though I was brought up catholic by grandma, I really like [showing] people and things that are not supposed to be ‘holy’ … [but, I feel] should be seen as ‘holy.’ I just think that it’s important that our community see other ther types of love and not just a heterosexual one.”

Marquez’s art is also a protest against corporations, which today use the cause of LGBTQ community for profit. He specifically mentioned San Francisco’s Pride. Marquez strongly believes that the yearly celebration that first began as political protest for visibility and acceptance, has morphed into “giant corporate parade.”

“You see Google and other companies say they’re here for the community, but you don’t see them distribute any of this money back to the community,” said Marquez. “I would want to see them organize voting education seminars or even HIV clinics—you know something that actually will help us.”

In contrast to the capitalist model that corporations follow, Marquez makes all of his art available for free. He doesn’t sign or copyright his work, some of which has been used by Telemundo. That particular art piece was used to explain the subject of “drag queens,” and Marquez was ecstatic.

“I just wanted to make art that could be shared, and teach the past so we don’t repeat the same mistakes. And at the same time, I don’t want to be the teacher, I just want pass along the knowledge,” said Marquez. “I was watching Pose [a show set in the early ‘80s] that focuses on the conflicts early gay and trans communities have to face, and I absolutely admire how those strong women protested everyone’s bullshit.”

Though Marquez admits that visibility has become better for the LGBTQ community, there is still work to be done. Specifically for the trans community.

“Trans women are still being killed for just being visible, and like I said before, a big portion of these deaths are from Latino/Spanish speaking countries,” said Marquez. “People need to be more loving. A lot of  what were lacking is empathy,  and in order for empathy to occur, education and conversations should be consistent, and that’s why I feel the need to create more art.”