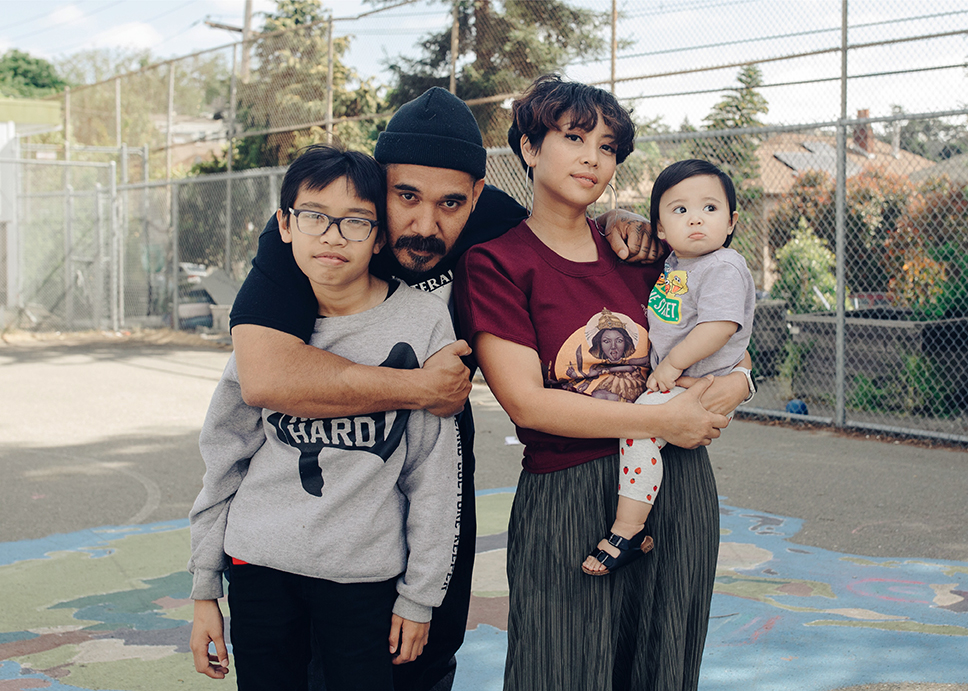 Muralist uses art to demand visibility for women of color

The sun beats down on the city of Oakland like a drum, as Filipina MC Rocky Rivera and I discuss hip-hop, feminism, motherhood and beyond. As townsfolk cruise through the neighborhood with sound systems blaring, it seems as though this San Francisco native has settled into a home befitting her artistic nature—bursting at the seams with culture and creativity. Reveling in the post-release glow of her latest album, “Rocky’s Revenge,” as well as the arrival of her baby daughter in May 2018, Rivera aims to shatter the restrictive perspectives on women and motherhood in today’s society.

Rivera, known to friends and family as Krishtine De Leon, has never been one to submit to the powers that be. Prior to pursuing music full time in 2007, Rivera worked as an established journalist writing for major publications like Rolling Stone, The Source, and XXL. Rivera’s experience, however, left her feeling restricted by the limitations that can often be imposed within major media outlets

“What they would always tell me was: ‘You have to write in an institutional voice,’ and I thought ‘Well, who is the institution that I’m writing for?’”

These restraints served as motivation for Rivera to return to her love of performing and she soon found freedom in her music.

“When I would perform, I never felt that amount of censorship. I never felt anybody trying to control what I was doing, it was all purely my voice and my perspective. I didn’t have to sugar coat anything.”

The topic of freedom has been prominent in Rivera’s music since the beginning and maintains its significance on “Rocky’s Revenge,” which was released on Oct. 16, 2018. This album is a call for liberation from the systemic oppressors who prioritize profit over marginalized communities of color—specifically women of color—examples of such being: white supremacy, patriarchy and imperialism.

Her song “Bad News” explicitly denotes these forces as manipulative and abusive, specifically with regard to the treatment of the Philippines and its people:

“I know your people probably don’t give a shit ‘bout me/The feeling’s mutual but you still gettin’ rich off me. I don’t pray to your temple or give an offering/We give our land and our labor, we still suffering.”

Her sharp lyricism points a finger at the religious imperialism that colonized the Philippines, and it serves as a protest against the economic motive behind colonization that has been justified using Christian rhetoric.

The theme of resistance also emerges in the album’s title track, “Rocky’s Revenge,” where Rivera criticizes the abhorrent treatment of the world’s marginalized populations:

“You tried to burn us, but instead you cleared the brush/So we can multiply and spread and heal the damage that you did to us.”

The line emphasizes that, while the attack on the marginalized remains ceaseless, it has fueled the fight of those being marginalized.

“Rocky’s Revenge” is one of the most emotional and aggressive tracks on the album. On it, Rivera specifically cites the damage that the Trump administration has done to women’s rights in not only the United States, but around the world. In response to the recent wave of anti-abortion legislation being pushed in states like Texas, Ohio and Tennessee, Rivera uses her music as a platform to fight back against the medieval impositions on women and their bodies.

The mother of two welcomed her daughter Izzy into the world on Mother’s Day 2018, explaining that she has lovingly dubbed Izzy the “executive producer” of the album, because she was pregnant throughout the recording process.

“There was a lot of fire, there were a lot of things that I was angry about because I wanted to make it a better place for her. The whole album is dedicated to her. I named her my executive producer because she was in my belly the whole time. So, a lot of that anger at the administration and the current situation for women across the world and maternal health was all for her and I hope she understands that one day.”

Rivera intentionally partnered with film photographer Kate Dash (who is also a mother of two) to direct the music video for her song “Best Shot,” because of Dash’s understanding of what it truly means to be a mother who hustles. Rivera’s decision to include a breastfeeding scene in the video was meant to normalize the act regardless of the inevitable sexualization that comes with it.

“These,” she said, pointing to her chest, “serve a function. These aren’t just men’s playthings, these aren’t just an adornment or an accessory. So, what do we have to be ashamed about? I’m hoping the more visible it is, the more normalized it’ll become, and the sooner people will realize that, yeah, moms can rap and they can feed their babies and they don’t have to
compartmentalize.”

Aside from politics, the album addresses interpersonal relationships and family history, which speaks to Rivera’s capacity for versatility both as an artist and a mother. Rivera demonstrates her combative spirit as well as her vulnerability through her music and she expresses her frustrations regarding the outdated trope of mothers being incapable or lacking in any sense. In reality, there is no power like the power of motherhood and Rivera ensures that the people don’t forget that.

“I think the whole belief that once you become a mom, then your attention becomes divided and you can’t focus, is not true at all. Moms prioritize. We don’t bullshit. We are more resourceful, more productive and we do a better job because we work harder. I just want people to know that, yes, moms are out there doing it and as long as we can all champion each other, I think that we can get so much done. It’s just unfortunate that our country is last in lead to support women, last to provide paid maternity leave of all the developed countries and it just doesn’t make any sense to me. So, I hope that my art will push people to think about those things.”