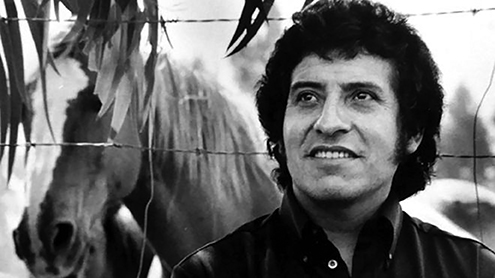 Shaping the Mission District: This month in neighborhood history

“…yes, my guitar is a worker

shining and smelling of spring

my guitar is not for killers

greedy for money and power

but for the people who labor

so that future may flower!

On July 3, 2018—45 years after the deed—eight of the soldiers who murdered Chilean musician and activist Víctor Jara were finally tried and sentenced to 15 years in prison (one other suspect was sentenced to 5 years for his role in covering up the killing). Those soldiers backed the military coup of Sept. 11, 1973 that brought an end to the democratically elected government of the socialist Salvador Allende, and ushered in 17 years of dictatorship, the effects of which have profoundly marked Chile.

Allende was killed in the presidential palace on the first day of the coup. Víctor was murdered a few days later.

So many years have passed since that Sept. 16, 1973, when Víctor was murdered in Estadio Chile, that I am a bit ambivalent about this long-awaited legal resolution.

Hopefully, the murderous deed has been a heavy weight on the collective conscience of the killers and in the conscience of those who ordered his killing (even if it was just the fear of being caught).

I am a bit shy about the title for this article. I do not want to sound pretentious. I prefer to be called “lucky.” Although ours was a short-lived friendship, it was, to me at least, a memorable experience. At the time of his death, we had been planning a theater/music collaboration.

As a student in the Theater Department at Cal, I was assigned to help my touring compatriots. I translated some and I even made it onto the stage, holding up some background banners. Thus, although I was not acting in it, I felt part of the production of “La Remolienda” (“The Carousing”). It was my first participation in the Chilean theater.

Víctor had directed it and he also was part of the cast. It is important to point out that, besides being a musician, he had studied theater and had become an accomplished theater director.

Maybe we exchanged a few words in that first encounter, maybe not. But the memory of that experience is very much alive today.

In October of 1972, as soon as my graduate program was over, I went back to Chile. I could not wait any longer.  Allende had been elected in 1970. I wanted to be part of the new process!

When I got there, the rumblings about an upcoming military coup were everywhere.

Even as Allende was being sworn in, the Chilean oligarchy was already plotting against him, with material and inspirational help of the U.S. Government.

Then president Richard Nixon’s Secretary of State Henry Kissinger infamously said: “I don’t see why we need to stand by and watch a country go communist due to the irresponsibility of its people. The issues are much too important for the Chilean voters to be left to decide for themselves.”

That naked, disgusting way to interfere in the Chilean democratic process is just one example of the many times that the United States has interfered in the affairs of other countries all over the world. Thus, the current outrage over alleged Russian cyber attacks does not impress me. It is an example of that old proverb about chickens coming home to roost.

Early in March of 1973, now in Chile, I run into Víctor Jara again. I had started a theater/dance group and we rehearsed in the same space where his wife, Joan, taught: the School of Dance of the University of Chile.

I recognized him easily. He was now a famous, beloved singer, a member of the Communist Party, and a defender of the Allende government. His music was profusely heard on the radio. His songs were tender, radical, funny. Because of that, plus the fact that he was from humble origins, he was hated by conservative Chileans.

When I approached him, as he waited for his wife, he was warm and happy to meet “another crazy guy from the theater…because you have to be ‘a loco’ to choose this profession! Or maybe the profession picked us, right?” Those were his words, as we said goodbye, after exchanging phone numbers.

A week later, my phone rang. When I asked whom it was, a voice said: “Víctor.” No last name. He noticed my silence and he added: “Jara. Víctor Jara.” He invited me to hear him play that night, at La Peña de los Parra, in downtown Santiago.

After the show, we went back to where I was staying, house-sitting for a friend. Once there, we opened a bottle of wine, shared some bread and cheese and talked. And talked… and talked some more. Music, theater, current events.

About 3:30 a.m., he said: “What is good, if short, is twice as good!” I told him that my mother also used that phrase. He said: “Then, your mom is a wise woman!” We laughed. He picked up his guitar and left. We promised to talk again, soon. We now had some creative plans!

Time flew by and the multiple political and musical responsibilities that Víctor had prevented us from meeting again.

The last time I saw him, was on the evening of Sept. 10, 1973. I was getting to a rehearsal with my group. He was leaving with his wife.

As the doors of the elevator were closing, we only had time to say,  “Let’s talk this week! Call me!”—a wave of the hand and that was it.

The next day, the coup happened. That very day, Víctor was arrested in his place of work, the Universidad Técnica del Estado. He was taken prisoner to the Estadio Chile, with many students and workers. Once they recognized him, it was the beginning of his end.

On Sept. 16, he was taken to an obscure corner of the Stadium and shot. 44 times. Maybe they feared that he was immortal?

They were right. After all, we earn immortality with what we do in our lives. Víctor Jara lives in his songs, in our hearts.

If you hear his music, you will also become his friend.