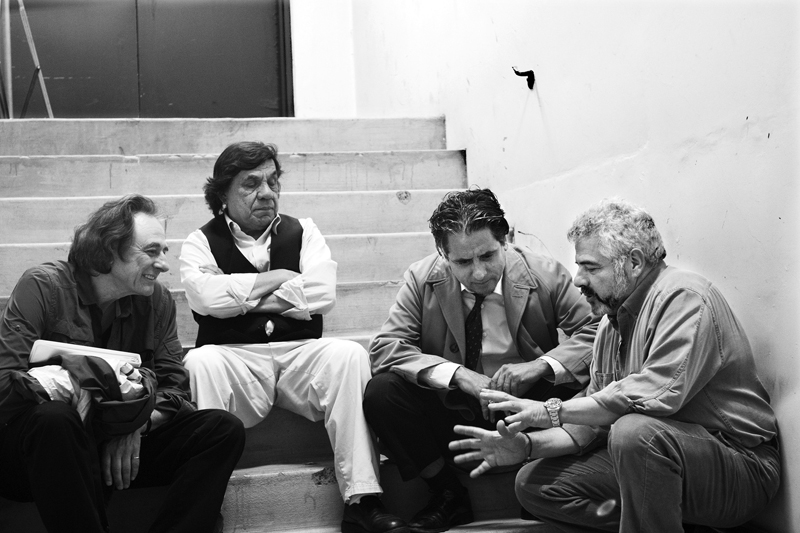 The Spanish-language dubbed version of the locally produced film, “The Other Barrio,” will make its world premier Sept. 1 at San Francisco’s Roxie Theater. “El Otro Barrio” screens at 7 p.m., and will be followed by a Q&A in Spanish with Alejandro Murguia and Dante Betteo. Based on a story by San Francisco Poet Laureate Alejandro Murguia, the film is directed by Chile’s Dante Betteo, and co-produced by Betteo and local photojournalist Lou Dematteis. It has been selected for the Chicano international Film Festival in Los Angeles on Sept. 11. El Tecolote had the opportunity to sit down with Dematteis to talk about the process of dubbing the film.

Making the film was quite a grassroots effort, but tell us about the process of dubbing the film?

Like you said, it is a grassroots effort, so we didn’t have a lot of money. And a lot of the time, Dante and I put in ourselves, and we weren’t getting compensated. So originally, we had wanted to do a Spanish subtitled version, which would mean everything would have to be translated into Spanish, and then put into the film. We didn’t have the funds to pay anybody to be able to do that, and it was very time consuming. So while we hadn’t given up that idea, we have a sales agent in Los Angeles, and she was able to make a sale to a distributor in the United States [Olympusat Entertainment] that distributes films in Spanish. So as part of the deal, they did the dubbing. So we got some money for it, but it wasn’t that much. But [what] we really got, that was part of the deal, was the master of the dubbed version.

Did you, Dante or Alejandro have a say in what accent was used in the Spanish dubbing?

No. And that’s interesting because that’s a big deal. As you probably know. Every country thinks their Spanish is the best. The company [Olympusat] is based in Miami, so I thought that they would be doing the dubbing in Miami. But actually they have an office in Mexico City, so the film was dubbed there. But it was interesting because there’s a certain accent in Mexico City. So they did really good. Some dubbing, people tell me, they have a man and a woman, and they do all of the voices themselves and try to make them sound different. But in this, each character has their own actor. But I did play the trailer for a friend of mine who’s from Mexico City and he said, “Oh man, that’s so D.F.” So it has a Mexico City accent, but what are you gonna do?

The film itself is important, given the recent history of fires in the Mission, but how important was it to make it available to the monolingual Spanish-speaking community?

It was always in our mind that we wanted to do that. And we always are, looking at the Latin American market. Film festivals actually like films that are subtitled, as opposed to dubbed. When you make a film, you want as many people to see it as possible. But also, it’s an important story, so we want as many who can, to see it. If we’re locking ourselves out of a certain audience because it’s English only, then we wanted to develop the opportunity so that we could present it. What will be interesting is seeing what kind of audience we will get for the show in Spanish.

How will film be distributed?

How does it make you feel, seeing this community effort go international?

It’s great. My background is as a still photographer, documentary photographer, photojournalist. You have a feeling of accomplishment, doing something like this. But what you really want, is as many people to see it as possible. It doesn’t do any good to take pictures or make films, and you get to show them to your friends and stuff, but getting it out and to start breaking into the Spanish-language market is great. Olympusat—the people that they’re distributing it to—we’d have no way to ever reach them.

Do you have any expectation for how the film will do Internationally?

That’s tough. We don’t know what we’re going to make when it comes to international sales. We still have bills we’re paying off and we’re trying to keep an income stream. Unfortunately we missed the big ones. We got HBO and HBO Latino to watch it, but neither of them picked it up. HBO is probably the biggest money we could get. But we’ll continue to keep pushing it.

What kind of impact do you think the film has had in terms of creating awareness of gentrification?

We show the film all over the United States—Washington D.C., San Antonio Cine Fest. We’ve had a nice combination of regular festivals and Latino film festivals. The last one we did was the Chicago Latino Film Festival, which was the best festival of any that we’ve done. They were fantastic. But everywhere we go, there’s a problem with gentrification. And there’s a problem with gentrification in the traditional ethnic neighborhoods—Latino neighborhoods, black neighborhoods, Chinatown. Chinatowns all over the United States are under the same kind of pressure, even in New York. So we think it’s great that this film has become a vehicle for discussion. And people ask us, “What can we do?” And we tell them, “You have to organize.” It’s the only chance you have. You’re not going to stop it, but you can tamp it down and help as many people stay in the neighborhood. It provides people with a bit of optimism. The other thing that’s important is how many films do you see where the majority of the people that you see on the screen are Latino, or Asian, or non-white. Our stars were non-white. I think that’s great for people, to see that and say, “Yeah, we belong up there. Just like anybody else.” We were very glad to provide that positive image for people.