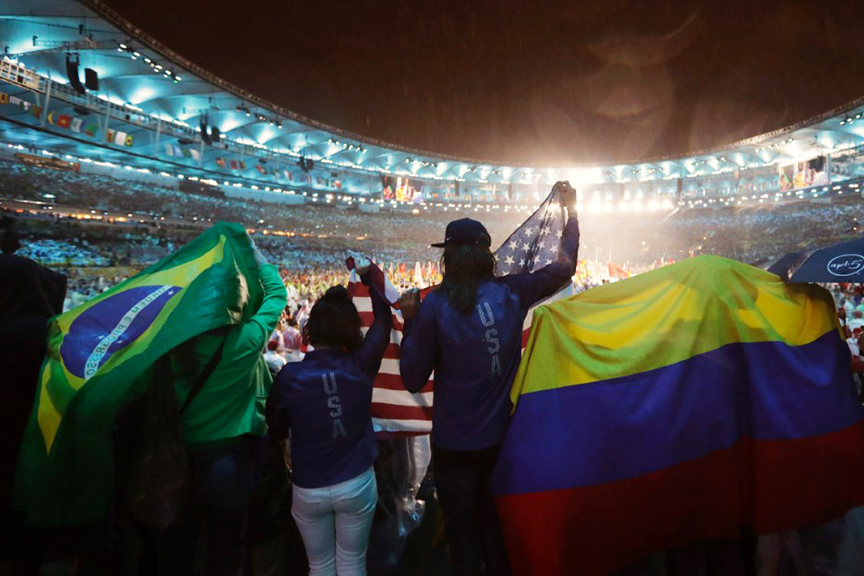 Believe it or not, Hillary Rodham Clinton is the change the country needs

Every four years, it seems as if large portions of the world stop their regular lives to become enthralled by the Olympics. Suddenly, magically, most of us become overnight experts on sports that, until seeing them on TV, we had no idea they existed, or at least had little knowledge of.

The Olympics seem to be one sure way for an athlete to become a surprise worldwide celebrity, both good and bad (as we have learned, not all athletes who win gold bask in the spotlight), or at least a celebrity in their respective countries. It is indeed an amazing space in time when wars, famine, global warming or even political elections of utmost importance become second fiddle to arrows, balls, racquets, horses, batons, canoes and the gold, silver and bronze that some will hang from their necks.

Among the good things, we get to see the amazing feats that the human body can accomplish, such as the gravity defying vaults and jumps of a Simone Biles or a Laurie Hernández, those petite gymnasts with the humongous abilities. The fact that Biles is a young African American woman who was adopted (her biological mother battled a murderous drug addiction) and the fact that Hernández, barely 16, is of Puerto Rican background and born in the United States, made their stories much richer. Of course, I also have to mention another Simone, last name Manuel, who made history by becoming the first African American woman to win a gold medal in swimming, when she won the 100 meters freestyle. Historically, swimming has been a rather restricted sport.

Of course, we have to touch on the sheer dominance of Usain Bolt, the Jamaican male sprinter who has dominated the speed races over the last three Olympics. This year, his countrywoman, Elaine Thompson, also won the 100 meters, cementing the glory of Jamaica as the world’s capital of speed—that is athletic speed, not the nasty drug. Or the way Michael Phelps, the ageless swimmer from the United States, has also dominated for so many years. Phelps lost his last event, the 100 meters butterfly, to the young Singaporean Joseph Schooling, who declared: “I wanted to be like him (Phelps) as a kid.”  Phelps response was indeed classy: “I’m happy with how things finished.”

Nevertheless, me being a Latino Americano and a former athlete (but that’s another story), I have to focus on the example given by some Latino American athletes and how their perseverance and success transcends the individual glory of their accomplishments. Because of their accomplishments, entire countries bathe in bubbly and contagious happiness, and seem to find in their sports heroes and heroines many reasons to feel a long forgotten joy and pride.

Take the case of Mónica Puig, the tennis player from Puerto Rico, who earned her country’s first gold medal, ever. She has become a veritable national heroine, for an island who has yet to achieve its first independence and is still considered a “U.S. territory,” instead of being called for its true name: a colony of the United States.

Or the gold medal in judo won by Brazil’s Rafaela Silva, a black woman from Rio de Janeiro’s notoriously poor “favela” of Cidade de Deus, or “City of God,” a place better known for the abject abandonment of their residents, who are mostly black.

Or the triple jump winner among women, the Afro-Colombian Caterine Ibargüen, who was raised by her grandparents when her parents had to leave Colombia due to their long civil war, that now—finally—seems to be ending. The fact that Ibargüen now lives in Puerto Rico and her trainer is a former high jumper from Cuba, simply adds to the positive aspects of this story.

Those are just some examples, so please forgive me if this column does not mention that particular achievement from your particular country. I am absolutely certain that it is deserving of much attention. Not just a mentioning in a humble article, but of all kinds of accolades and applause. But, perhaps, entering in the not-so-good territory, we have to learn to move away from our deep-rooted nationalisms and learn to be happy and to celebrate whenever and wherever an amazing story takes place in the Olympic games, especially if it’s related to Latino América. That way, we will become stronger, as we move away from the odious barriers that the owners of our countries have invented for us, to keep us separated.

As I finish this column, I will connect it to a beautiful Mexican documentary that I saw a couple of weeks ago, called “All of Me/Llévate mis amores.” As I watched the film, somehow my thoughts took me to the Olympic games, which had just been inaugurated.

The film traces the inspirational example given by some Mexican women living in the town of “La Patrona” in the state of Veracruz. The town is located right in the path of “La Bestia” (“The Beast”), a freight train that travels North in the direction of the United States. Besides its regular cargo, the train carries hundreds of young people, mostly men, who hang dangerously to the top of the wagons and inside any available crevice, following their dreams for a better life up north.

The women of “La Patrona” (and they are mostly women, although some men also help, including a couple of migrants who fell off, like one who lost a foot when he fell) have organized themselves to help those immigrants who are risking their lives on that train. In spite of their poverty, they show their generosity by cooking large pots of rice and beans, staples of most Latino countries, plus tortillas and water that they pour into discarded plastic bottles that are collected from local businesses. The women, or “Patronas,” place the food in plastic bags and tie them to the bottles of water. Then, they go to the place where the train slows a little, and hand over those precious packages to the migrants.

Seeing those women, young and not so young, standing or running alongside the tracks, risking life and limb as they try to pass their food and water to the needy migrants, who also hang dangerously from the side of the wagons to receive the gifts, made me think of the Olympic games. These were indeed one of the most thrilling types of events that could be conceived. First, those involved had to have the skill and the valor to hang and receive those bags safely. The “athletes” were not just from one particular country, they were from Guatemala, Honduras, El Salvador, México…and those Mexican women were motivated by a deep and generous impulse, an impulse that moved them to organize themselves and to discover a strength and a vision that perhaps they sorely lacked in their lives.

I could not think of a better relay race in any Olympic competition.