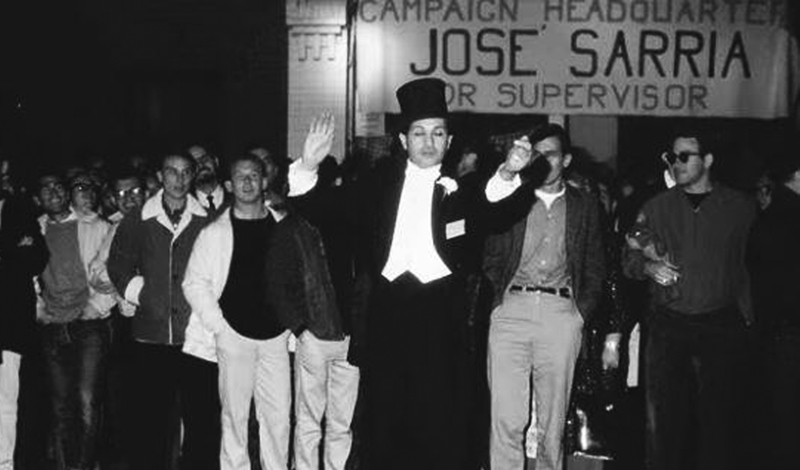 SF prima ballerina talks Cinderella and growing up in Cuba

Most people in San Francisco have heard of Harvey Milk, but few know about the man who paved the way for Milk and other LGBT politicians: a Latino named Jose Sarria.

“This was a time of extraordinary oppression,” said Paul Boneberg of the LBGT Historical Society. “If you were wearing any clothing of the opposite sex, you would be arrested for impersonating the opposite sex.”

It was an era where police raided gay bars and arrested patrons. Venues would oftentimes be shut down, and detained customers would find their names published in the newspaper, their lives destroyed. Sarria’s anger about the raids was part of his motivation in campaigning for a seat on the San Francisco Board of Supervisors.

Before running for office, Sarria was known as “the Nightingale of Montgomery Street” for his work as a female impersonator. He sang regularly at the Black Cat Cafe in North Beach during the late ‘50s and early ‘60s, reworking famous operas to reflect the challenges of gay persecution in San Francisco.

What made him unique was his fearlessness and defiance during a time when most gays and lesbians were taught to believe their orientation was an illness. In his younger years, Sarria served during World War II. At 4 feet 11 inches tall, he was too short to enlist, but he didn’t let that stop him. He seduced a recruitment officer and was accepted into the service.

While police were raiding bars, Sarria would tell the patrons of the Black Cat “don’t be afraid, we should fight back, there’s nothing wrong with us,” said Boneberg. Sarria used his celebrity to organize, and was known for his saying: “Together we stand, but divided they will catch us one by one.”

Sarria didn’t win a seat on the Board of Supervisors in 1961, but the 5,600 votes he garnered were the first indication that the gay constituency held an important sway in politics.

Actually, he never expected to win the seat; he wanted to prove a point, and despite his loss, his campaign was deemed a success for the gay rights movement.

After his run, there hasn’t been an elected official in San Francisco—“not even a dogcatcher” as Sarria told the The Atlantic in 2011—“that did not go and talk to the gay community.”

Sarria would go on to found gay rights organizations and charities to educate the LGBT community. Most notably, he founded the Imperial Courts, a charity with international branches that has raised millions for LGBT health and awareness causes.

Recognizing Sarria
Yet despite all of these accomplishments, few in the Latino community have heard his name. Filmmaker Dante Alencastre wants to change that, and he’s working on a documentary about Sarria’s life titled “Nelly Queen: The Life and Times of Jose Sarria.” In addition to interviews from friends and loved ones, the film will include more than 23 years of never before seen, personal footage of Sarria, captured by his good friend Joel Castel between 1992-2013.

“He paved the way for people like Harvey Milk,” said Alencastre. “[Sarria was] ahead of his time … he was at the forefront of creating gay pride, gay consciousness … there was nothing like that back then.”

Alencastre is currently raising funds to travel back to San Francisco from his home in Los Angeles to complete the interviews required to finish the film.

LGBT history is now being taught in California schools.

“There will come a generation that will have grown up with Jose’s stories, and will say ‘Oh yeah, I know about Jose,’ the way they now know about Harvey Milk,” said Boneberg. “Frankly, it’s a great American story. Americans should all be proud of it.”

Before his death in 2013 at the age of 90, Sarria said to Alencastre: “I hope that people don’t forget about me.”

This has been a driving force for Alencastre to finish his documentary. He wants people to know not only Sarria’s life story, but the lessons contained within it.

“You have to be your authentic self,” said Alencastre. “And to love yourself just the way you are. ”

The fundraising campaign for the production of “Nelly Queen” closes on March 26. To make a contribution, visit https://www.indiegogo.com/projects/nelly-queen-the-life-and-times-of-jose-sarria or contact Dante Alencastre at droa@dantesemail.com.

To learn more about Sarria’s life, you can visit the GLBT museum on 4127 18th St. in the Castro, which currently has a large display about Sarria, including some of his outfits and campaign materials.