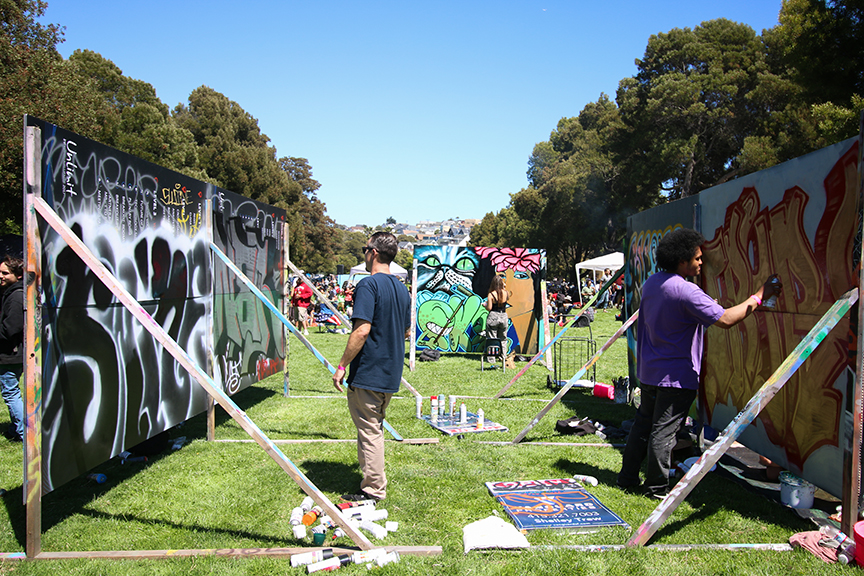 The smell of fresh paint from spray cans infused the air while the sound of old-school hip-hop beats surrounded the children and their families gathered at Precita Park for the 21st annual Precita Eyes Urban Youth Arts Festival.

For the past two decades this festival has hosted fun-filled activities, providing a safe space for community youth to create street style art.

After the first event in 1996 at the Presidio Valley Community Center, a “writers meeting” of young street artists came together to talk art. One of those was Suaro Luis Cervantes. Cervantes, 38, is a well-known street artist and youth advocate, who continues to keep the festival alive.

“Welcoming people into this kind of atmosphere of open mindedness and allowing them to have an open creativity is very important for us,” Cervantes said. “In the end, the event is a gathering where people express themselves through elements such as spoken word, dance, and painting.”

Cervantes’ parents, Susan and Luis Cervantes, founded Precita Eyes Muralists in San Francisco’s Mission District 40 years ago. According to the organization’s blog “The Precita Eyes Way,” Susan started the festival after witnessing a rise in graffiti art. Wanting to incorporate and provide a safe place for youth to express themselves through street art, Susan and her team began developing the festival.

“I think it also helps people appreciate graffiti art more,” Marttila said in an interview featured on the Precita Eyes blog. “People who might think it’s all just tagging. Tagging is a touchy subject because people think it’s vandalism… People can practice and express themselves without getting hassled by the police. So it’s less taboo. And also for the urban youth, or for the urban art community, just to have events like that where everyone can come and get along and meet each other and be cool.”

The festival also offered face painting, food, live music, canvases to paint on and much more—all free to the community. It was made possible by volunteers, donors and sponsors such as the San Francisco Recreation & Parks, Blick Art Materials, Trick Dog, YMCA and Wing Wings. Event coordinator Yuka Ezoe has been part of the community based event for years.

“We love giving back all the love that we get from the community,” Ezoe said. “About 50 people are involved in putting the event together to benefit the Precita Eyes Mural Arts Center, which has been standing for the past 35 years.

Artists like Moving Beyond Productions, 1Lady, Diamond Lung, Jamie Z and more took on the stage while Gemimac and Ohm-I MC’d the stage.

Jude Capili heard about the event through a friend and decided to attend for the first time and show some support to the community.

“It’s a great event and very good outlet for the community to come out and support the kids as they create art,” Capili said. “Hopefully we could keep it going and get more people and kids involved.”

20-year-old Giovanni Rodriguez recently moved to San Francisco from Pacoima, California and has already gotten involved with local youth. He volunteers at the 5 Elements Youth Program where they attend events like these to inspire the youth to express themselves freely through the art of hip-hop.

“I see this as a positive event not only for the youth, but for the community as a whole because you get to see a collection of different artists create and at the same time benefit the youth,” Rodriguez said. “Seeing these creators all in one place helps inspire me and the youth. In this case with 5 Elements, it allows these kids to come to the event and express themselves through art.”

This year’s festival was attended by hundreds who came to celebrate young artists in the community. Cervantes summed up the successful history of the 20-year-old event:

“Overall our mission is to have an accessible and safe place for people to create in public. Loving each other, loving yourself and working out all the struggles is what it’s all about at the end of the day.”