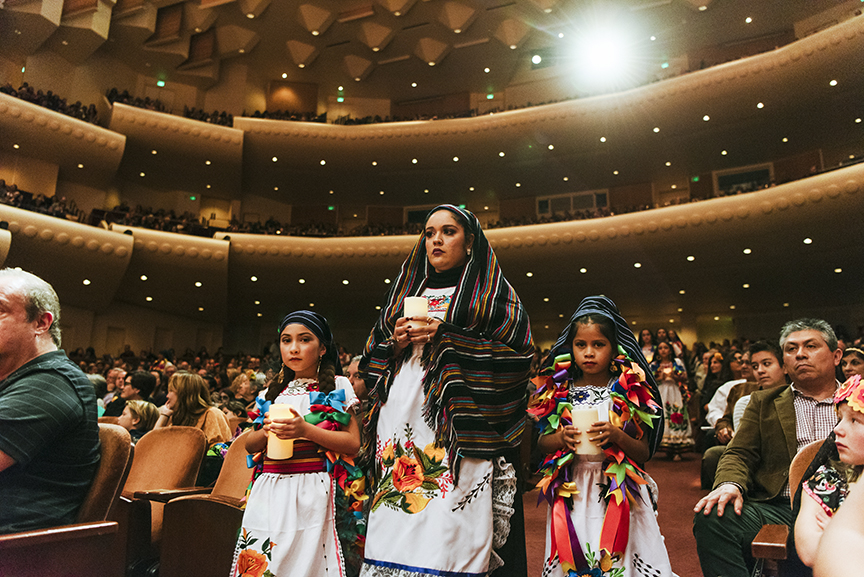 The Girl Who Tamed the Beast: A True Faerie Tale

On Nov. 3, as we approached the Louise M. Davies Symphony Hall, the afternoon sun illuminated a distinct atmosphere, that of converging audience members including people of all ages, many dressed in colorful attires, speaking two predominant languages: English and Spanish.

Inside the symphony hall and its various lobbies, there were many beautiful displays of Day of the Dead installations. There were  paper maché skulls (large and small), mariachi music (this year, the Mariachi Juvenil de la Misión was present), tamales being sold and many actors and actresses were costumed and made up in traditional Day of the Dead garbs, with an abundance of “Catrinas.” The capacity audience enjoyed themselves in all areas of the building.

It was the 11th straight year that the San Francisco Symphony sponsored a Día de Los Muertos Community Celebration.

Once the concert began, the excitement was palpable. Under the animated (and obviously expert) and happy guest conduction of the Portuguese-American Jacomo Bairos, the audience enjoyed a veritable mix of classical pieces by Johann Sebastian Bach (German), Silvestre Revueltas (Mexican), Manuel de Falla (Spanish) and Ernesto Lecuona (Cuban).

In the second half, the Villalobos Brothers, born and raised in Xalapa, México, presented a rousing mix of Mexican and classical music… but there was no mistaking their roots: They started by singing with strong and rousing falsettos—Mexican style—and with a virtuoso display of violins. Backed by a large number of musicians from the SF Symphony, the presentation was an exciting expression of a successful musical interconnection.

Personally, when the Villalobos Brothers sang an adaptation of a “classical” song from the Mexican folklore, where they joked with the issue of immigration, I loved the fact that a couple of the SF Symphony players smiled and even laughed, exhibiting their bilingualism.

The response of the audience to the Villalobos segment was quite different to more traditional subdued classical audiences: some screamed along lustfully, or they yelled “¡Viva México!”…to what someone added “and half of the United States!”

There were also loud “¡Vivas!” to the approaching “invading caravan of immigrants,” thus described by some of our (mis)leaders.

Día de los Muertos has become an important icon in the cultural calendar of San Francisco.

On Nov. 2, the Mission District, a still surviving bastion of the Latino community—although it has become a more complicated multicultural enclave—turns into an enormously colorful celebration of Día de los Muertos.

Massive numbers of people descend upon the Mission to enjoy the atmosphere, which includes a large parade, lots of music and dance (led always by Aztec dancers), with lots of incense, food and plenty of skulls, either painted on the faces of the participants or depicted in drawings, surrounding murals and costumes.

This San Francisco version of an old Mexican tradition (although other Latino countries celebrate a more subdued version of remembrance for their dead) started over 40 years ago, with a relatively small contingent of artists. Among the initiators, we should mention artists from Galería de la Raza, including the recently deceased René Yáñez.

It is especially poignant that Galería de la Raza is currently in danger of losing its traditional corner of operations, at 24th and Bryant streets.

With the tsunami of evictions and condominiums—largely prompted by the “invasion of a caravan of techies and tech companies” that have dramatically changed the city—new alliances have to be formed, in order to keep a healthy profile for our cultural expression. Thus the importance of the SF Symphony’s Día de los Muertos Community Celebration.

I briefly spoke with Martha Rodríguez Salazar, Mexicana, who is described in the concert’s program as “pre-concert curator and music adviser.” Martha has been in that position since 2008, when this particular concert began.

When asked about her experiences, Martha said: “This is my 11th year organizing this celebration and it is always very emotional to live that process of creation and planning.

It gives me great satisfaction to be able to help to promote the work of Bay Area artists, who have not been able to show their work in other places. Not only musicians but graphic artists, designers sculptors. I also learn a great deal from other varied guest artist, who are  generally well known. Being a classically trained musician, who also performs folk music from Latinoamérica, I think that it is important to promote the artistic interconnections among various cultures: Latino-Anglo and Classical-Popular. I believe that I have learned a great deal about what unites us and what separates us. “

To end, Martha Rodríguez added: “I am proud to have been able to bring various aspects of the Day of the Dead celebration into a place that has historically focused on European classical music. My desire is that at least once a year the Symphony can include some classical music from Latinoamerican composers”.

I agree: the more the better. This Día de los Muertos Community Concert has become another important icon in the cultural calendar of San Francisco. Hopefully, it will expand to include new concerts that can show the quality of Latinoamérica’s classical music.

Hopefully, with admission prices adequate to those new audiences, that will show up!