Residential and commercial tenants at 2884-2892 Mission Street and 3412-3424 25th Street are facing steep rent increases, which have put many at risk of being displaced.

After purchasing the building in April, Jeries Azar gave its 20 SRO tenants and 11 small businesses new leases, pricing at least two SRO tenants out. He also tripled some of the commercial tenants’ rent and required them to cover building repair costs.

“It was kind of nerve wracking,” said Eric Scheib, co-founder of fashion boutique Lemon Twist. “It’s like pressure tactics to get you to sign the first lease that comes in.”

Although the SRO tenants are relatively protected under the rent ordinance (their rent can only be increased a certain amount each year) the commercial tenants on the ground floor have very few protections.

For the husband and wife team who own Lemon Twist, a small fashion showroom that has been in the building for the last two years, the rent increase wasn’t a problem, but the cost of potential building repairs was.

“We really don’t want to have potentially really expensive structural things to fall on us that should fall on [the landlord],” Scheib said.

The deadline for the tenants to sign the leases was fast approaching, when Calle 24, Mission Economic Development Agency (MEDA) and Mission Neighborhood Services, and a few other neighborhood organizations offered to help.

“We mobilized quickly,” Calle 24 Co-founder and President Erick Argüello said. “We got the city involved, sent in letters to the landlord asking him to negotiate with the tenants and got a pro-bono attorney to advise their rights.”

There have been at least 37 buildings on Mission Street since 2015, that have been converted into destination restaurants and retail spaces, as well as high-end bars, cafes, gyms, and office spaces. This has displaced many community-serving businesses, according to data collected by United to Save the Mission.

“The greatest risk that we are facing is not only through the displacement of residential tenants, but the displacement of commercial tenants too. It is completely transforming the cultural makeup of what I would consider to be the heart of the Mission,” said Carlos Bocanegra, a lawyer for Mission Neighborhood Services. 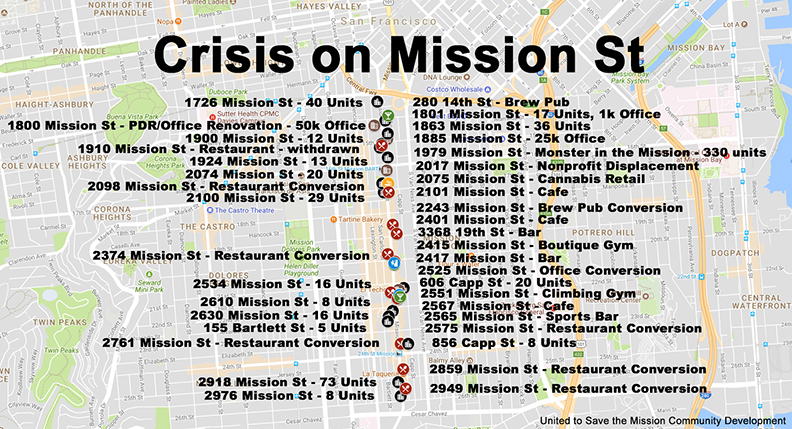 Dubbed “Crisis on Mission Street,” a pattern is emerging where landlords are evicting commercial tenants and selling the vacant storefronts at exorbitant rates. Property owners will often hold on to these vacant spaces for months and years, until someone can afford the higher prices.

“That’s something that we have come to expect from Valencia Street,” Bocanegra said. “A lot of small business owners have already been priced out of that area,” he added.

And now those high prices are bleeding onto Mission Street.

“If you’re a community-serving business selling things at low to medium price points, those raises in rent are unstable in the long term,” Bocanegra said.

The owners of the Red Cafe saw their rent nearly triple, setting an unprecedented rate for market prices along the Mission corridor.

“It’s pretty hard on us of course,” said Eddy Edwan, who along with his wife, has been running the 20-year-old Red Cafe for the last 12 years. “No one likes that jump all of a sudden. We are trying to recuperate.”

Some of the business owners at the 25th Street building have been there for more than 20 years, with no rent increase until now. And some are finding the increases too expensive to stay.

“Maybe if the rent hadn’t increased so much, maybe I could have continued,” said one of the tenants who requested to remain anonymous. (At 74 years old, she has owned her business for more than 20 years.) “But with the rent increase, I would have to put [in more work] and I don’t have that kind of energy anymore.”

Even with the continuous and stressful negotiations, the Scheib’s said they have no ill feelings towards their landlord.

“He is a business man and we are small business people talking in good faith because of all the pressure [from the community groups]” said Mr. Scheib. “All of our communications have been friendly.”

Tim Chan, who has co-owned Mister Lee’s Dry Cleaners for the last 13 years, saw his rent increase but not as much as the Red Cafe. He said he was not surprised by the rent increase, but just grateful that he gets a longer lease.

“I’m month-by-month. I don’t know how long I can stay. At least I’m get getting a five-year lease now,“ Chan said.

Some of the tenants are still negotiating with the help of the community groups and nonprofits.

“Without those agencies helping us, it would have been a nightmare,” Dannette Schieb said.

“The agencies have been good at educating us, empowering us, providing interpretive assistance. It’s good to see that support to the community,” he said.