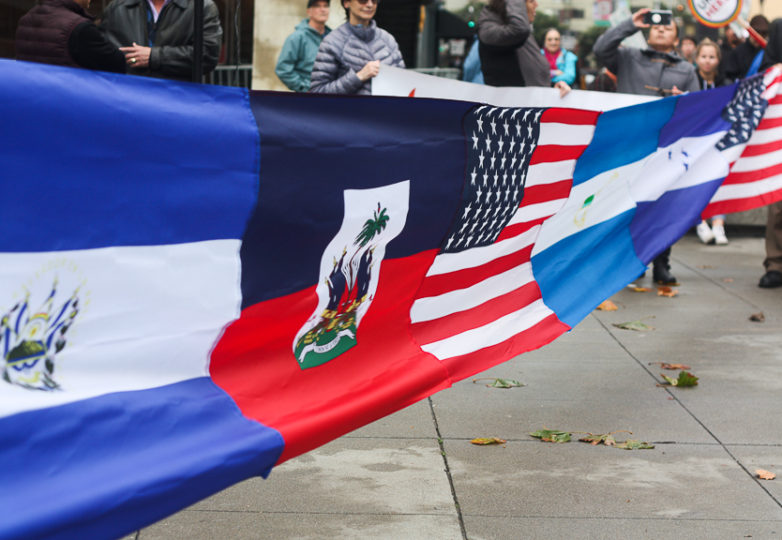 Immigration activists hold the flags of El Salvador, Haiti, the United States, Nicaragua and Honduras during a save TPS rally in front of the San Francisco Federal Building on Jan. 5, 2018. Photo: Alexis Terrazas 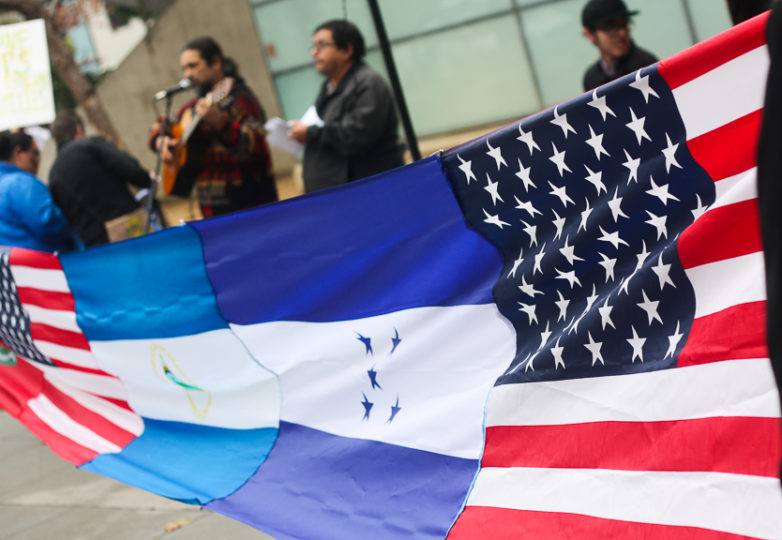 During a Save TPS rally on Jan. 5, 2018, the flags of the United States, Nicaragua and Honduras are stitched together and displayed in front of the San Francisco Federal Building. Photo: Alexis Terrazas 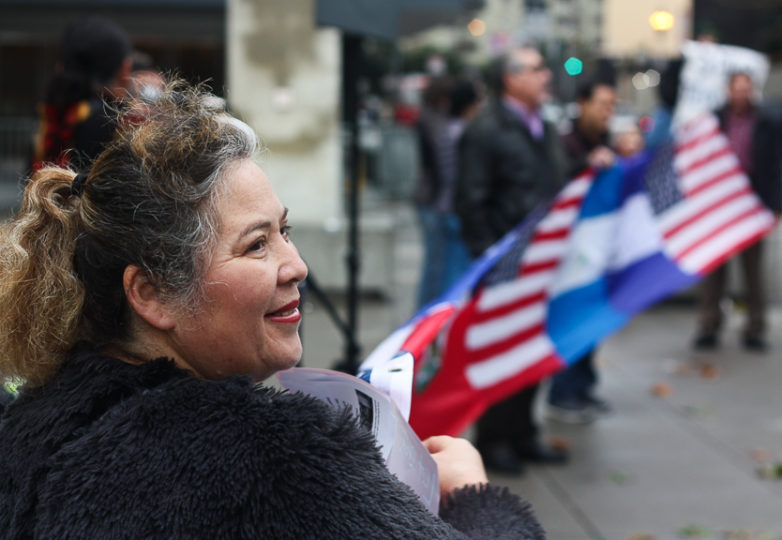 TPS holder Carmen Guardado, who fled domestic violence in her native El Salvador 23 years ago, attends a Save TPS rally in front of the San Francisco Federal Building on Jan. 5, 2018. Photo: Alexis Terrazas 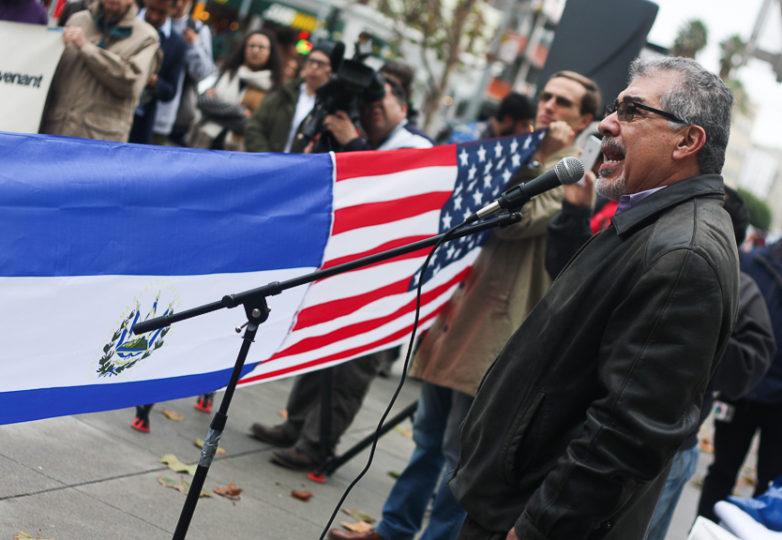 Salvadoran immigrant and local radio host Ramon Cardona speaks at a Save TPS rally in front of the San Francisco Federal Building on Jan. 5, 2018, about how the United States-funded civil war in El Salvador influenced TPS. Photo: Alexis Terrazas 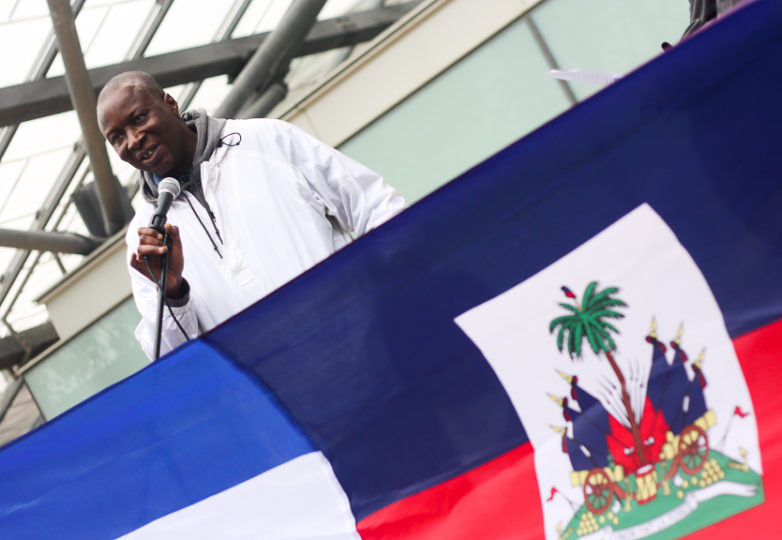 Adoubou Traore, an immigrant from the Ivory Coast, who serves as co-Director of the African Advocacy Network and Executive Director of African Immigrant and Refugee Resource Center (AIRRC) in San Francisco, speaks on behalf Haitians at a Save TPS rally in San Francisco on Jan. 5, 2018. Photo: Alexis Terrazas 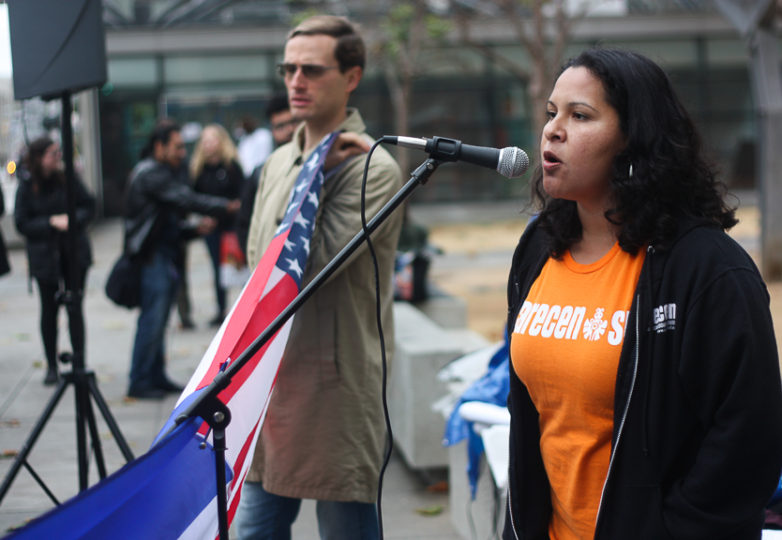 Laura Sanchez, staff attorney and program director at CARECEN SF, speaks at a Save TPS rally in San Francisco on Jan. 5, 2018, and urges TPS recipients to be screened by an attorney or a nonprofit, such as CARECEN. Photo: Alexis Terrazas

“All of my family is here, I don’t have anyone in El Salvador,” said Guardado, who has lived in the United States for 23 years, 16 of them under TPS. “It would really affect me if they sent me over there … I’ve worked my whole life here.”

The decision to end TPS (which offers temporary residency for 325,550 foreign nationals from 13 different countries who have fled violence and natural disasters) for Salvadorans comes after the termination of TPS for 50,000 Haitians set for July 22, 2019, and for 2,550 Nicaraguans on Jan. 5, 2019.

News of this most recent attack on immigrants by the Trump administration has left many TPS holders and their families fearing the possibility of deportation.

“Today, I don’t know how it is to live in El Salvador,” said Guardado, who lives in Oakland and is member of Red Nacional Salvadoreña en el Exterior (RENASE), a national network for Salvadoran immigrants. “I know there is delinquency and a lot of deaths everyday, and that scares me.”

Guardado fled her homeland more than two decades ago to escape domestic abuse. The father of her three daughters was a military man, who used drugs and abused her.

“I had to seperate myself from him,” Guardado said.

But when Guardado fled El Salvador, she left her daughters behind. She arrived in the United States, and overtime was able to bring over her daughters, who today are all U.S. residents.

“I’m the only one [who doesn’t have legal status],” Guardado said. “How ironic life is. I … only have TPS, and I brought them after and they’re residents now. But I’m happy. Because of them, I have two grandkids.”

Having always worked and paid taxes while living in the United States, Guardado wonders what kind of work she would do if she were to be sent back home. She currently works at Rinse, a dry cleaning and laundry service. She sees an irony in the Trump administration’s targeting of immigrants who contribute to the American workforce.

“Before Trump came into office, we were happy. They renewed our status every 18 months,” Guardado said. “I think he has aimed to ruin the lives of all us immigrants. He doesn’t realize that we are the working hands that do the jobs that no American wants to do. The Americans that work in Rinse … they don’t wash clothes, they don’t fold clothes.”

“Who works construction?” she continued. “Hispanics. Who cleans bathrooms? Us. And him, what? Has he ever cleaned a bathroom? I don’t think so.”

TPS for Salvadorans was officially designated in March 2001, after a series of powerful earthquakes devastated El Salvador. On Jan. 13, 2001, a 7.7 magnitude earthquake struck just off shore of El Salvador, killing at least 844 people, injuring more than 4,700, destroying 108,000 houses and damaging more than 150,000 buildings. The earthquakes continued into February of that year, with a  6.6 striking on Feb. 13, and a 6.1 striking on Feb. 28, according to the United States Geological Survey.

In her Jan. 8 announcement, DHS Secretary Nielsen “determined that the original conditions caused by the 2001 earthquakes no longer exist. Thus, under the applicable statute, the current TPS designation must be terminated.” A similar argument was made by then acting DHS Secretary Elaine Duke when she ended TPS for Haitians last November, stating “that those extraordinary but temporary conditions caused by the 2010 earthquake no longer exist.”

But Adoubou Traore, an immigrant from the Ivory Coast who serves as co-director of the African Advocacy Network and executive director of African Immigrant and Refugee Resource Center (AIRRC) in San Francisco, disagrees. Traore spoke on behalf of Haitians at a Save TPS rally in San Francisco on Jan. 5, 2018.

“We all heard what happened in Haiti in 2010. And we know what was there before the earthquake. And we don’t believe that anybody seriously can stand in front of an entire people and then say, ‘Haiti has been able to overcome the damages after this natural calamity,’” said Traore. “Let’s be more serious about that.”

Ramon Cardona, an immigrant from El Salvador and local radio host, said that TPS for Salvadorans was influenced by the Salvadoran Civil War, which was funded and armed by the United States in 1980. The war was devastating, resulting in over 70,000 casualties and nearly 500,000 refugees.

“That helped a lot at that time with Congress to win Temporary Protected Status,” Cardona said. “It was a victory of the the people here in the United States.”

Many in immigrant activist circles are hoping that Congress can find a permanent solution for TPS holders. Guardado is personally longing to become a citizen.

“I feel like I’m from here,” Guardado said, who has bought a home and raised her daughters through her work in restaurants, cleaning houses and hotels. “For 23 years, I’ve worked and struggled here. I feel I’ve earned it.”

Rina Valle, a TPS holder from El Salvador who came to the U.S. 18 years ago, is torn between being hopeful for a permanent solution and being worried about having to return to El Salvador.

“[TPS] opened up a lot of doors for us. But above all, there isn’t fear to simply go out and make a life for ourselves in this country,” she said. “We never thought they would make such a drastic decision like this without thinking of the children, business owners and homeowners. Personally, I think things are going to fall down for me, and I don’t know what I’m going to do.”

The facts about TPS

According to a 2017 study by the Journal on Migration and Human Security, which focused on the three countries with the highest TPS recipients (El Salvador, Honduras and Haiti), the TPS labor force participation rate from those three countries was 81 to 88 percent, a higher rate than the total U.S. population at 63 percent.

The study also noted that about 273,200 of the children of these TPS holders are U.S. citizens, and 87 percent speak at least some English, and more than half speak English well, very well, or only English. The study also cited that about 27,100 (11 percent) of those in the labor force are self-employed, and of the 205,900 households from these three countries, 61,100 have mortgages.

Laura Sanchez, staff attorney and program director at CARECEN SF, has become familiar with the stories of anguish from people who have lived and paid taxes in the United States for close to two decades, and now have no clue as to what they’re going to do next.

“I think it’s part of a bigger plan to just systematically attack the immigrant community,” she said. “I think it’s one piece of a big puzzle that they’re implementing.”

Sanchez urges TPS recipients to be screened by an attorney or a nonprofit, such as CARECEN.

“A lot of people may be eligible for other types of immigration relief that they’re just not aware of,” she said, noting that CARECEN is currently offering consultations for TPS holders from 9 a.m. to 12 p.m., Monday-Friday.

“I think it’s beautiful that we’re out here, but we need to be walking the halls of Congress,” Sanchez said. “The DACA recipients, they’re great in the sense of organizing. We need to be holding hands with them.”

For those seeking more information about the options for TPS holders from El Salvador, a forum has been scheduled for Saturday, Jan. 13 at the Salvadoran Consulate in San Francisco, located at 507 Polk St. (between Turk Street and Golden Gate Avenue) from 2 to 4 p.m.